Well, that rather unseasonable snowstorm cut Comic Con short for me, at least. I didn’t go up today (Sunday), even though I hated to miss my panel. I mean, I actually looked up all this stuff people have said about writing compelling stories and thought about the topic and decided what *I* think is important and came up with examples of authors who I think do it just right and took notes on why their narratives work particularly well . . . and can you tell I am the sort of person who errs on the overpreparedness side? Anyway, I’ll suggest a similar topic to the Archon people and hopefully have a chance to use all this then.

So, snow aside — and let me just say, it’s very pretty even down here, where we’re supposed to get less than half as much as they get in St L, but WHOA is the snow blowing around madly out there. Even the girls don’t want to spend much time outside, though they generally love snow.

ANYWAY, as I was saying, today’s snow aside, I really did have a great time at the Con yesterday! Even though I am not really all that interested in Superman t-shirts or whatever. Did you know there is a company that makes bathrobes like the TARDIS? Really. Check it out: 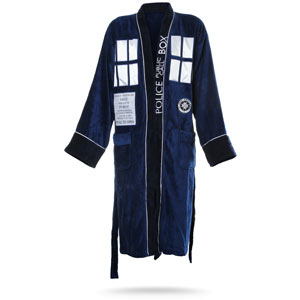 I didn’t think to take a picture while at the con, so I got this picture here. But it is exactly the same robe, and hey, if you would like to buy it, or no doubt many many other really snazzy robes, you can click through from here and get one, so I trust they won’t mind I borrowed their picture.

I did take a couple pictures, though. These modern phones really are amazing, GPS for getting there and home again, cameras while you’re there, text messaging to keep track of people you’re hanging out when it’s much too loud for phone calls, and you can even look up the programming for the Con on your phone if you’re too lazy to find out where to get a program.

Anyway, here’s my second favorite costume of the many I saw: 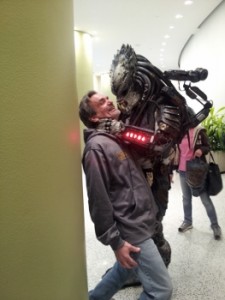 I had to ask someone what this was. I gather it is a Predator. Love the costume, that’s for sure! I hear the movie Predator vs Alien is better than one might expect — I ought to rent it sometime.

And check out this one: 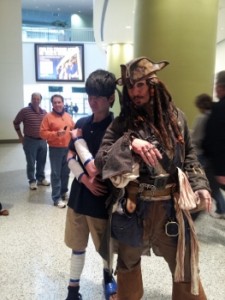 This guy, I recognized. I’m sure you’ve seen “Pirates of the Caribbean”? Well, let me tell you, this guy here? He had ALL the mannarisms and the voice and everything. I could have SWORN he was the actual actor from the movie! He was just amazing. I bet you can imagine how long it took this guy to get through the entrance hall? Like, an hour, because just about everyone wanted their picture taken with him, and no wonder.

It was worth going to the Con just to see the costumes, honestly, though even when I was eighteen I hope I would have had better sense than to wear, well, never mind, I’m sure you can imagine.

Also, I did get to hang out with Sharon Shinn and that certainly made the trip worthwhile. We talked books and authors and contracts and all that good stuff. She used to work downtown, it turns out, so I met her at her house and admired her giraffe collection and then drove from there to the convention, with her to make sure I took the right exits and found a good parking location. And the Left Bank Books staff arranged a very attractive display for us all. Theirs was the only table with actual books, so I expect they would very likely have sold out except, you know, snow. I doubt attendence was great today except for people staying at the hotels.

So, next year, if there’s a Comic Con in March, I’m in! We only get snow in March about 1 year in 4, so hopefully next year at this time it will actually be spring at this point, or at least not the dead of winter.