Isn’t it something to find a new favorite author? With the added plus that she has a dozen books or more out already, so I can just immerse myself in her writing. How fun is that, right?

After reading The Fall of Ile-Rien trilogy, I have declared that March is Martha Wells Month and I’m going to read through her entire backlist. I may of course have to cheat and extend Martha Wells Month into April, but hey! It is my month and I can do that if I want. 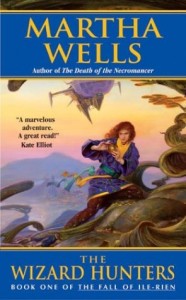 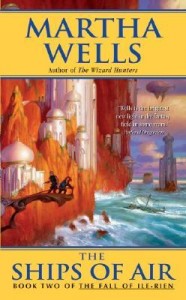 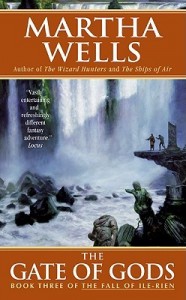 Okay the first thing to know is: If you’re starting THE WIZARD HUNTERS and you’re not sure you like it? Read at least three or four chapters before you decide.

We have a third-person divided pov structure, Tremaine in a world with the flavor of, say, mid-1800s England; and Ilias in a very different world that doesn’t map terribly well onto any real historical era I can think of but is much less technologically advanced. It’s important that you wait for the two plotlines to converge before you decide whether you like the characters or the story, because I just about guarantee you will once the plotlines come together. Which they do very early on, so there’s actually not much patience required. And after that, the books really take off!

Tremaine is my favorite character EVER! She is right up there with my other favorite-ever characters, like Miles Vorkosigan and Vlad Taltos and Eugenides. She is prickly, sarcastic, ruthlessly practical, sometimes insecure, occasionally suicidal, and doesn’t have a romantic bone in her body. You know that discussion a week or two ago about books with female protagonists but without a lot of romance? This is that book. I mean, there is romance — but it starts late in the series and it is never, but never, a gushy obsessive romance.

I mean, Tremaine used to write plays? And at one point, she thinks to herself that when she used to write in a romantic relationship, the audience wouldn’t be sure if the two characters were supposed to be in love or not. And by then you can just imagine the way Tremaine would write romance, and it makes you laugh.

There’re lots of secondary characters from Tremaine’s world — of the ones we see from the start, Gerard is possibly my favorite of them because I have a thing for dedicated do-the-job types. I love Florian, too, though. I kept rather hoping Ander would get shot or fall off a cliff or at least see the error of his ways and start taking Tremaine seriously, but, sigh, I guess there really are jackasses like that in the world and he does provide a certain something. Like, a contrast to Ilias, for one thing.

Because Ilias! Tremaine is my fave, but Ilias is also great. He’s like the Muscle-Bound Barbarian Warrior, only for grownups: complex and believable, fascinating backstory, highly competent but plausibly so. I love his relationship with his friend and foster-brother, Giliead. And I love the way their society is so different from Tremaine’s and how those differences echo through the whole story.

You are probably getting the idea that there are a lot of characters. This is true, and more as time goes on, but Wells handles them all extremely well, and gives them all time off as appropriate rather than trying to clutter up every scene with the whole bunch of ’em, and so it’s easy to keep track of everyone. Particularly since everyone is distinctive. Mostly Wells sticks with Tremaine and Ilias as the pov protagonists; as we go on through the trilogy we do get little sections from other points of view, but this is beautifully handled and never obtrusive or annoying; there’s none of that dilution of pov you get in some modern epic fantasy until you can’t tell who the blazes the main character is supposed to be.

Oh, it’s so much fun! I’m actually not always in the mood for a gaslamp fantasy setting, so gating from Tremaine’s world into Ilias’ and back mixed the settings up and kept everything feeling exciting. Those gates! New corners to peek around just everywhere, and this is Martha Wells, right? So you know the scenery is going to be grand-scale and stunning. Ruined cities everywhere, and all of them different. But the ruined cities aren’t the only thing on a grand scale: check out the Revenna. One of my favorite lines from the first book was something like: “So, we’re going to make our secret escape on the biggest ship in the world.” (And they do.) I thought the ship was modeled on maybe the Queen E, and I was almost right — Wells has an author’s note that says she actually based the ship on the Queen Mary.

I love Tremaine’s world — like a gaslamp fantasy, right? But with fey that seriously affected things until cold iron became more common. My favorite exchange in the third book, one of the few times we actually see a fey, it says to Tremaine: “You look tasty, little girl.” And she levels a gun at it and says, “So do you.” (The fey is in fact more intimidated by Tremaine than the other way around.)

I love Ilias’ world more. We get to see a good bit of it, but Ilias’ home town is my favorite. The customs are so different and the interaction between the characters is really enhanced by this. I don’t want to be too specific. Just take it as read that every scene is beautifully set, okay?

The overarching plot is complex, but it hangs together just fine. It’s an invasion story — as suggested by the title of the trilogy, right? — and of course the plot is concerned with taking back Ile-Rien from its conquerers. The conquerers are . . . really interesting. Almost anything I say about them would be too much, so silence seems the best policy here.

The first book is really pretty well self contained, which is handy if you want to give the trilogy a try without committing to all three books, but the second definitely feeds right into the third. The romance could not be more removed from the simplistic insta-romances we see everywhere today and that for me are such a turn-off. Wells handles her romance with subtlety and humor and lets her people be complicated and conflicted. But not in an annoying way! Not that kind of conflicted!

There was some political idiocy in the third book, which was painful to read. I mean, don’t we get enough political indiocy in the real world? Thankfully the scenes where we have to endure moronic self-serving politicians working hard to seize defeat from the jaws of victory are quite brief. And I hope you don’t mind if I just say that the worst of the lot gets what’s coming to him. Too bad we can’t deflect nasty curses onto deserving politicians in the real world!

Anyway, I would like to find out sometime whether Wells knew the basic structure of the plot from the beginning. I think it’s likely she didn’t — from comments she made during a panel at WorldCon last year — but The Fall of Ile-Rien reads like she did. It’s a nice coherent plot, all the complicated problems on three different worlds arising from one basic source. The tiny little deus ex moments here and there are actually fitting and believable.

This is a great trilogy. It was the first really good story I’ve read on my Kindle, so now I know: yes, I like the experience of reading on a Kindle just fine. It’s comfortable to hold with one hand for long periods, and I’m glad they designed it to be held with either hand, because I didn’t realize this before, but I prefer to hold a book in my left hand.

THE DEATH OF THE NECROMANCER (which was a Nebula nominee) is set in Tremaine’s world, about thirty years before the events in the trilogy. I’m reading that one now. I’m glad I read The Fall of Ile-Rien first; I appreciate Nicolas more having met him first in the trilogy. ELEMENT OF FIRE is also set in this world, and of course that will be next.

Also, I only just noticed, but Martha Wells has various short stories, including four set in the Ile-Rien worlds, up on her website.

10 thoughts on “Recent Reading: The Fall of Ile-Rien”