So, I’m reading a nonfiction book by a psychologist, about his work with various patients. It’s an older book, published in 1988, but of course that does not in any way invalidate the observations and comments of the psychologist, so as nonfiction goes, this doesn’t come across as very dated.

The reason I bring this up is that every chapter starts with an inkblot. They’re not discussed or important, they’re just there as artwork. And they aren’t the official inkblots, which are shown here if you are interested. They’re just random inkblot shapes, as far as I know.

What struck me, about three chapters in, is that … I seem to be a more positive person than I thought I was. I mean, there are times I feel pretty cynical. Yet my first impressions kept being things like:

A glamorous woman wearing one of those amazing big hats.

… and so on. Mostly animals, and every single one cheerful. I saw stuff like that even if I had to ignore half the ink in order to see those images. If I were talking to a shrink, I’d have to say apologetically, “But I have no idea about these big round lumps down here.”

I don’t generally see things in clouds, but if I did, I expect they’d be cheerful animals as well. 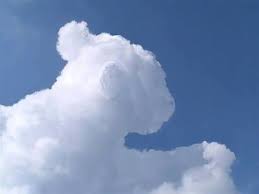