Sometimes I wonder, I really do. Like that time I suddenly couldn’t open the oven door without burning myself: have you ever had a particularly klutzy month like that? Probably not, probably just me.

So, this year, so far, I’ve made 12 kinds of cookies. And three of them — THREE — have not turned out well. I’ve been baking beautiful little cookies every Christmas for more than a decade and this year? Phooey. So annoying.

The little pastry cookies that you roll up into crescents around a pecan and honey filling? It’s one of my favorite kinds and I’ve made it several times and THIS time, the pastry did not cooperate and actually neither did the filling. Well, I only used half the dough, so I will be turning the other half into tiny little turnovers and sealing the filling in — maybe that will work better. In the meantime, the bad cookies were not pretty but were excellent re-interpreted as breakfast pastries.

The curry shortbread cookies I made last year? I got two requests for those, so I made them. Except I plainly forgot to put in half the flour. They are not actually terrible, but they are not what they are supposed to be. I’m calling them “Curry Butter Crisps” — or, if that would freak people out, “Spicy Butter Crisps.” I may remake the whole recipe later, too, and prove I can do it right.

I will say, the dogs like the curry butter crisps. They got the ones that were more over-baked. Not one spaniel was heard to complain about the quality of the cookie.

And, I forgot to put the caramel layer on the hazelnut thumbprint cookies. They’re good, but not as good as they should be.

Anyway: tonight, not sure what to try. Paciencia, maybe. I have made paciencia twice and once they failed completely, so evidently there’s a fifty percent chance of adding to my failure rate for the year, so there’s that. But I want to try them again this year anyway, so onward!

Or marshmallows — I have this great new recipe from Bon Appetit for layered coconut/orange marshmallows. 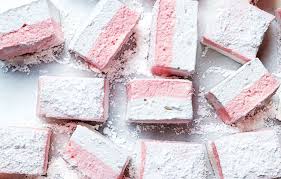 Update: I did try both. Here are the paciencia: 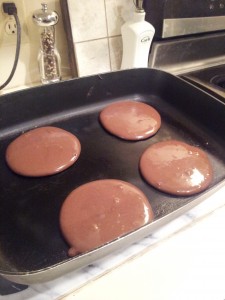 As you must surmise, they did not work out for me this time. The egg whites beat up stiff, I added the sugar and the meringue beat up stiff, then I added the flour and the whole thing collapsed. So I added more flour and milk and the egg yolks and some oil and made pancakes instead, because there’s no point in *wasting ingredients.*

But the marshmallows turned out fine! 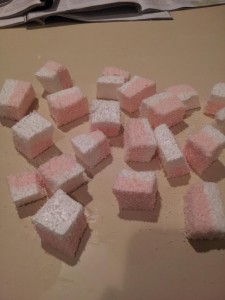 There! I didn’t use coconut milk because I hate to say this but coconut milk by itself is NOT going to give you much coconut flavor. I used a different coconut marshmallow recipe that uses water and coconut extract. I know that works fine. Then this morning I sliced up the marshmallows and tossed them with unsweetened ground coconut, which I happened to have around. Yes, I nibbled marshmallows before I even had breakfast. What? Sugar is good for you.*

So that was my baking experience last night and early this morning! This evening: chocolate truffle cookies.