They’d told Aristeas that the Arimaspians were horrible, but he wasn’t prepared for how horrible they were, and it nearly cost him his life.

This is the first line of Beyond the North Wind by Gillian Bradshaw, which I have never read. I picked it up recently because of this post at By Singing Light. Well, the post and following comments. So. Pretty catchy first sentence, isn’t it? 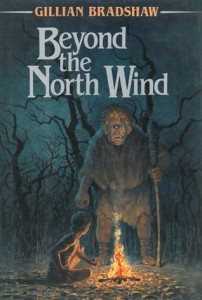 I definitely want to dive right in.

On a windless summer day in an uncertain year, more than a century after the founding of Cornell, a man who told lies for a living climbed to the top of The Hill to fly a kite.

This is from Fool on the Hill by Matt Ruff, which I borrowed from my brother during a recent visit because I really enjoyed Ruff’s Set This House in Order. I would say that’s definitely a promising beginning.

I stare at my gravestone. Locke Jenkins. They paid too much for it. More than they could afford.

I know, that’s more than one sentence, but hey, they’re very short sentences. What a different feel that gives to the opening of a story! This protagonist sounds, what? Closed in, defensive, bitter. Or maybe that’s just me projecting from the second book to this one, the third. This is Fox Forever by Mary Pearson, as you may have recognized, because I wanted to finish the trilogy after reading The Adoration of Jenna Fox and The Fox Inheritance. I do expect a tolerably happy ending, though I’m not actually familiar with Pearson’s other work, so I can’t be sure.

Happiness, Luc thought as he stroked his wife’s bare shoulder, was not like chocolate. It didn’t melt if you held it too long in your hands.

I bet you all immediately guessed that this might be that new Laura Florand story, and you would be right: The Shadowed Heart. I read this one this past weekend — actually, I went back to The Chocolate Heart and re-read that first. Honestly, it’s amazing how Florand makes the luminously beautiful amazingly rich Summer Corey into a woman you just weep for. Also, I now have a faint but perceptible urge to write some kind of Persephone / Hades retelling. I wonder if that will ever turn into anything?

Sunset fell early over the wintry moorlands of northern England, and prudent men abandoned the road to the criminal, the desperate, and the mail coaches.

This is from Season for Desire, Theresa Romain’s newest Christmas-themed Regency romance, which just came out a couple months ago. These are fun, light, charming, and just right for the Christmas season. Also, I like the chapter titles: Chapter One: Wherein the Adventure Begins, Much Against the Will of Certain Participants. I’ve always enjoyed that kind of thing — and it establishes the tone right off, doesn’t it? Light, fun, charming.

Here’s one I just have as a sample, so far:

Call me Ishael. Yeah, I know, but in this case it’s really my name. Ishmael Horatio Wang. My parents had an unfortunate sense of humor.

I don’t know — the first line is obviously copied from my puppy’s name, so how can I turn it down? Maybe Ish would like me to read this to him? He would probably wag his tail whenever I said “Ishmael.”

Anyway, I got this sample because of a recommendation I saw around somewhere. Here’s what Goodreads says:

THE GOLDEN AGE OF SAIL HAS RETURNED — IN THE YEAR 2351

When his mother dies in a flitter crash, eighteen-year-old Ishmael Horatio Wang must find a job with the planet company or leave the system–and NerisCo isn’t hiring. With credits running low, and prospects limited, he has just one hope…to enlist for two years with a deep space commercial freighter. Ishmael, who only rarely visited the Neris Orbital, and has never been off-planet alone before, finds himself part of an eclectic crew sailing a deep space leviathan between the stars.

Join the crew of the SC Lois McKendrick, a Manchester built clipper as she sets solar sails in search of profit for her company and a crew each entitled to a share equal to their rating.

Space adventure! Who doesn’t love space adventure? It’s got really good ratings on Goodreads — over four stars with about 300 reviews.

So that’s an even half-dozen of the titles I’ve most recently added to my TBR pile, virtual and physical. They all sound pretty promising!

11 thoughts on “Recent Additions to the TBR shelves: First Lines”