Okay, so, since I’ve been wanting to read more SF anyway, Science Fiction Month seemed like the way to go! So I actually signed up as a participant. That’ll make me post regularly on SF topics for sure. Let me remind you all that SF month is being managed by Rinn at Rinn Reads and by Kelley, Asti, and Leanne at Oh The Books. You should definitely click over to both those sites if you have time. And the master schedule for the month is here.

So, listen, about THE MARTIAN. If you’re going to be stuck in an airport and then on a plane for hours, then you, like me, may find this one a good choice. Because oh yes, it sure is a pageturner and no mistake. I’m glad Rinn Reads put this one on my radar, and also that Linda gave it a thumb’s up in the comments here a few days ago, because Linda was right — this book might not really be for everyone, but I loved it. 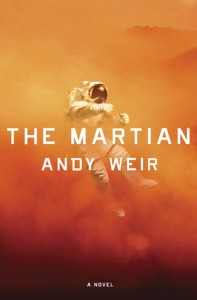 Romance: hah hah hah. No. After all, Mark is all by himself for the entire story, so he’s plainly not going to be involved in a romance. Plus, he wasn’t seriously involved with anybody before he got stranded, so the angst quotient is low on that account, too. Weeeellll, okay, fine, there is a *tiny* bit of romance between two of the secondary characters, but seriously, it is pretty much a blink-and-you’ll-miss-it plot element.

Overall plot: utterly simple and predictable. Mark gets left for dead on Mars without sufficient resources to survive and then figures out how to survive anyway, meeting one crisis after another until he is finally rescued. Given the basic shape of the plot, it’s basically clear that Mark himself and everyone else involved in the rescue will surmount all difficulties.

Technological details: many many many technological details about the “Hab” and the equipment and techniques that Mark uses to keep it habitable and make the oxygen and water and so on that he needs to survive. Many details about Mark building stuff and stuff breaking disastrously and Mark fixing stuff, or finding ways to survive when the stuff can’t be fixed. The author did lots of research to make all this as true to the science as possible, and does it ever show, let me tell you. But don’t let that put you off! This is all actually interesting and even compelling, even to me, and I’m not a tech geek by any means.

Tension and conflict: Oh, yeah. In spades. Mark is the hero, Mars is the antagonist, and the story is a real page-turner. Despite all the stripped out elements the reader (or at least I) am used to depending on to catch and hold my interest – character development and interactions and all that – this is a fascinating, compelling read.

I would say that the following people might be a good bet to enjoy THE MARTIAN:

Readers who are into tech and/or space and/or adventure stories.

Readers who used to enjoy watching the MacGyverTV show.

People who liked Merrie Haskell’s CASTLE BEHIND THORNS – remember how Sand was the only character on stage for a third of that story? This reminded me of that. I know that is a MG story and THE MARTIAN is meant for adults, but still. If you have a teenager around who is into tech / space / nonfiction / adventure, then this might be just the ticket.

People who enjoyed Kim Stanley Robinson’s Mars trilogy, but might like something simpler, faster, a lot more fun, and without Maya’s histrionic temperament, not to cast stones.

3 thoughts on “Recent Reading: THE MARTIAN by Andy Weir”