First off, I have to admit, I’ve been pullllled into my Kindle and I’m having a hard time emerging. Not by the SHIVER trilogy — I am amazed that is by Maggie Stiefvater: really? I guess this YA paranormal romance trilogy is her debut effort, like, the one that got published before she learned to do it right? No offense to anybody who is in love with that trilogy; I don’t think I was in the mood for Obsessive Teen Romance. But the worldbuilding and stuff doesn’t make sense. I can hardly believe I’m complaining about the worldbuilding in a Stiefvater story, but there you go.

No, it’s not SHIVER. The series I’ve been pulled into is the Fall of Ile-Rien trilogy by Martha Wells. Love it! More about it later, when I have finished the third book. I’m about 20% of the way through the second book now. I am SO glad I discovered Wells. Fabulous author.

Obviously my own work is on hold. I don’t feel bad about that, April is going to be crazy-busy with gardening stuff, so don’t want to get too sucked in to writing just at the moment. I did write 36 pp over spring break, bringing the total up to 98 pp, or 31,000 words. That would mean I was about a quarter to a third done if I weren’t likely to overwrite by 100 pages, which I’ve done twice, so it could certainly happen. On the other hand, I didn’t have that problem with BLACK DOG, so maybe that’s a good sign for its sequel.

I’m halfway through Chapter Four, and I actually do know what’s going to happen in the second half of the chapter, so it will be pretty easy to pick up again when I get to it. I rather think that may not be till early June, though you never know. I’ll be aiming to get it finished and through a first revision and off to my agent by the time classes start in mid-August.

Aaand — I can hardly stop without the most important update! 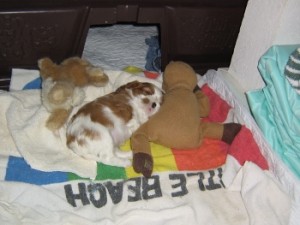 I turned the whelping box upside down yesterday! Now it is a den. The baby does spend a lot of time tucked away in her nice warm dark den, but as you see, she also comes out to see the wider world — and collapses into a restorative sleep after toddling around for about ten minutes. She is making definite play gestures toward her mom and her toys. Next week she will be hitting the UltraCute stage and starting to play with the other dogs. My Adora, who has had puppies of her own, can be trusted to play gently with a puppy — the teenagers will take more supervision!