Okay, first, I bet you saw this coming: 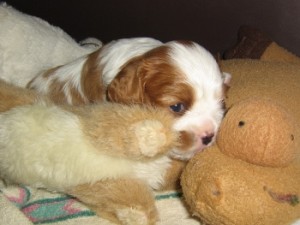 Look! Her eyes are open!

She’s getting cute! Also, at three weeks, she is finally pretty safe from basically everything, so long as I don’t actually drop her or anything. Last night I finally moved downstairs to the actual bedroom, leaving her on her own with her mom. She is able to toddle a little, though she certainly isn’t steady on her feet yet!

Other stuff that I’ve completed:

1) I have indeed finished starting all the seeds indoors that I’m going to. Fifty petunias, for example, and forty melampodium (creeping zinnia). A handful of little single marigolds, but those germinated so super-fast that I will start others outdoors when it’s warmer. They germinated in two days! If I were playing around with a gardening project with kids, I might use those, because I don’t know of anything faster.

I’m starting just a handful of tomatoes and peppers and eggplants this year. I attempted to start four tithonia, but only one germinated. I may try more outdoors. I’ll start celosia in peat pots a week before I want to set them out, they hate having their roots disturbed. I’ll start Phacelia and centauria and stuff outside, too, shortly. And annual vinca. Later this week I need to outline planting spaces with hoses even if I don’t sprinkle the seeds out there yet.

2) I finally wrote my guest post for Kristen’s Women in Fantasy month over at Fantasy Book Cafe ! Whew. I started about four different columns before finally settling on one and finishing it, that’s why it took so long.

3) I finished reading Merrie Haskell’s rough draft of her third book. It was really good, but I was glad to find something substantive to say when I was about 2/3 of the way through the manuscript. But I don’t think she’ll need to do much with it — honestly, it’s excellent. I’m really looking forward to A Handbook for Dragon Slayers , which is out in May. I didn’t get to read that one early, so I have no idea if it’s a fairy tale retelling or not — doesn’t offhand look like it from the Amazon description.

4) AND, yes, so far I am progressing with MY manuscript as planned. Well, not today. Today I have not even opened the file. But hey, the day is young, so I trust I will get my 5 pp (about 1800 words) written. Probably. I also want to take the two teenagers over to a hiking trail if it gets a little warmer. I must admit, freezing rain would compel me to be more productive.

Anyway! I am adding a new chapter 1 in front of the two chapters I already had. I went in knowing that the first words were going to be: “It’s a trap,” somebody said.

But it may amuse you to know that I didn’t know who was going to say this, or exactly what the trap comprised or who had set it, or who all was present in the scene, or much of anything except what the bait in the trap was going to be.

Obviously I worked that all out pretty briskly once I got going. (It was Natividad who said the line above, unless I change my mind, which I don’t think I’m going to.) Plus now I know more or less who set the trap, and what the different layers of the trap are (I think). Not sure yet how the good guys are going to spring the trap, defeat the bad guys, and get out with the bait. I expect I will find that out today. Or tomorrow at the latest.

So, lunchtime, and I still haven’t actually written a word as such. Bye, internet!