Important tip about summer gardening:  When you get an inch and a half of rain in late August in Missouri, that is God’s way of telling you it is time to weed.  Especially when it is  relatively cool and pleasant.

Besides the nice weather, the other interesting thing about this week is that I’m babysitting my brother’s two Cavalier King Charles Spaniels.  Along with *my* Cavaliers, counting the puppies that are for sale and also counting my ‘old man’ Papillon, that gives me . . . let’s see . . . *eleven* dogs.  That’s a lot even for me, way above my theoretical personal maximum.  Cavaliers are so easy to live with, though, that it’s not actually that much trouble to have a lot.  Especially now that the puppies are basically housetrained.

This also gives me a chance to find out how many Cavaliers can fit on the couch at one time (seven, five if I’m also on the couch — plus two cats).  Actually, mostly the dogs are clever enough to lie on the floor in front of the air conditioner vents, so the couch is seldom that crowded.

Important tip for living with a million dogs:  store the vacuum cleaner someplace handy.  And if you’re going to clip your brother’s dogs, do it outside because, honestly, no vacuum cleaner needs that kind of challenge.

Really important tip for gardening with dogs:  Try not to watch while the puppies dig holes in, wrestle on top of, and chase dragonflies through the flower beds.  When you hear the ominous swish-crash-thud of puppies battering down the butterfly lilies and rudbeckia, remind yourself that no plant without a sense of humor is worth growing.  Except Himalayan blue poppy, and you can’t grow that anyway. 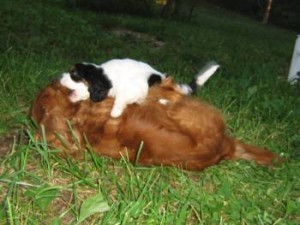 Merlin beating up his Aunt Adora

But thankfully not in the middle of a flower bed.  This time.

Adora is usually very tolerant of puppies!  Now that they’re four months old, I’m kinda leaning toward keeping Merlin unless a show home appears . . . he’s looking very nice!  Elin has some cosmetic features (freckles!  on her nose!) which mean she is heading for a pet home, when the right home appears.

Oh, and we’ve had SUCH an advance for puppies!  The youngsters now go to sleep at eight o’clock just like the older dogs.  This is almost as nice as having them housetrained because it gives me some nice peaceful hours to write.  Or read Mockingjay.  Whatever.

I am about half finished with the ‘werewolf’ book — not that they are werewolves exactly.  260 pp, yay!  I hope that is actually significantly more than half done, since I’d like to bring the ms. in at under 100,000 words, definitely under 120,000, and right now it’s a tad over 70,000.  As always, I am going to overshoot and have to cut.  Hopefully I will not wind up writing a hundred extra pages, this time.

I’m in the slooooow annoying middle section, but nevertheless I expect I will probably finish the rough draft sometime in October.  Probably not later than November, anyway.  I know roughly what happens for the rest of the book, though some important questions remain about details (what weapon is this one character going to make?  Why isn’t it going to work?  Exactly what is this other character do to pull victory from the teeth of defeat?).

After my first revision is done, I’ll send the ms. to my brother to read for logic — if any of my characters miss anything obvious when coming up with various plans to deal with the bad guys, I want my brother to spot it!  He’s really good at this.

And I need a friend of mine to read the ms. and check my Spanish, since I personally can’t even count to ten in Spanish.

Then I’ll send the ms. to my agent . . . I told her to expect it before Christmas because it ought to be possible to get it all the way done by then and a deadline helps me get through the slow part.

Good thing my part-time job gives me time to work on writing plus work in the garden plus train dogs for the Fall obedience and rally and conformation shows I’ll be hitting.

Important tip for training dogs:  Go ahead and spend money to enter those shows that are coming up in two weeks!  THAT’LL make you get on with the training!  The dogs will dance for joy when they see the training leads come out and the jumps appear and (most important) the liver brownies come out of the oven.

Oh!  And also!  While more or less on the subject of my actual job!  SUPER IMPORTANT TIP for parents!  Make sure your kid LEARNS THE MULTIPLICATION TABLES IN THE FOURTH GRADE LIKE KIDS ARE SUPPOSED TO.  When a student in college reaches for a calculator to multiply three times six?  NOT A GOOD SIGN.  This problem is way more common this semester than it was even three years ago.  Trust me on this one:  no multiplication tables means you will not make it through college algebra.

Okay!  It’s time for all the dogs to take a nap while I haul myself out of Mockingjay and actually get some work done on my’werewolf’ book!