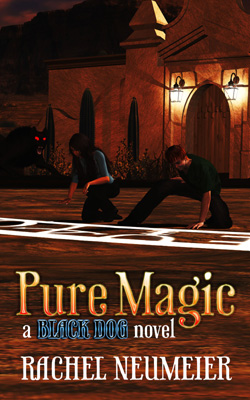 Following the defeat of their deadly enemy Malvern Vonhausel, Alejandro and Natividad – and their human brother, Miguel – have begun to feel that, against all odds, they may have succeeded in making a new home for themselves among the black dogs of Dimilioc. But keeping that home safe involves challenges they never anticipated. It’s bad enough that stray black dogs, taking advantage of Dimilioc’s weakness, are appearing everywhere; much worse are powerful rivals who would tear Dimilioc down entirely and claim Dimilioc’s authority for their own.

Then Dimilioc is shaken by the arrival of someone unexpected: Justin, who is both Pure and male; who is at once wholly ignorant of traditional Pure magic, yet uniquely talented; and who becomes immediately both a source of contention within and a potential asset for all of Dimilioc.

Then, as it becomes clear that Dimilioc has an unexpected and much more serious enemy, Natividad decides that, whatever the cost, both she and Dimilioc are going to need every asset they can gather. If Dimilioc black dogs won’t risk Natividad in battle, if Justin won’t help Dimilioc, if everyone won’t pull together voluntarily – then Natividad has a plan …