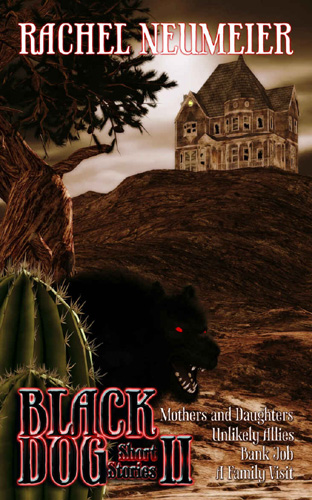 ‘Mothers and Sisters’ – Before the failure of the miasma that hid all supernatural darkness from the sight of ordinary humans, brutal black dogs sometimes ruled as kings—sometimes for generations. In a country where black dogs rule and the Pure are despised, even a girl as fierce and determined as Keziah finds life a precarious struggle. But after her little sister is born, she has so much to fight for…

‘Unlikely Allies’ – Ezekiel is on his own when he discovers an entrenched enemy with a particularly unpleasant plan to supplant and destroy Dimilioc. To defeat this enemy, Ezekiel needs an ally… even a man who might turn on him before the end.

‘Bank Job’ – Living and working with a lot of stray black dogs is a real trial for Ethan Lanning, especially since not even the best bloodlines and training gave him the kind of strength a Lanning ought to possess. But when a mission gets complicated, Thaddeus might be just the right guy to have at his back after all…

‘A Family Visit’ – Just an ordinary Christmas with his grandmother, that’s all Justin has in mind. Sure, it’s a little awkward that Grayson insisted Keziah keep him company on the trip, but everything will be fine once they get to know each other. But Justin never expected to arrive only to discover his grandmother has vanished from her home…