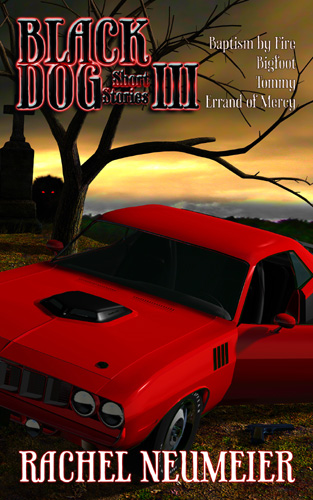 If you’ve read Shadow Twin, you may be wondering what Cassie wasn’t telling Miguel during their text exchanges. It turns out that while Miguel and the rest dealt with disaster out west, quite a lot was going on back home…

Something near Dimilioc is killing livestock and leaving strange tracks. It’s probably not Bigfoot… but it might be something even more surprising, and much scarier.

A year ago, Thaddeus chose to spare the life of a young black dog kid in Chicago – he even invited the boy to make his way to Dimilioc. It was a memorable incident. Certainly for the kid, who did not forget about that invitation.

Ezekiel never makes friends with anyone. Certainly not outside Dimilioc. Yet an unexpected call for help sparks an equally unexpected urge to go far out his way to lend a hand…

Keep track of familiar characters and get to know new ones in the latest Black Dog collection!