So, in between casually reading a couple of historicals, I have been poking around in my library, re-reading this and that. Books I don’t expect to get caught up in, the sort of thing I can read a little bit of and put down again, or skim through lightly. This category mostly includes books I have read a lot of times, or books I like but not that much (these categories are not mutually exclusive.)

At the moment, that means I have been re-reading the Telzey Amberdon stories by James Schmidt. 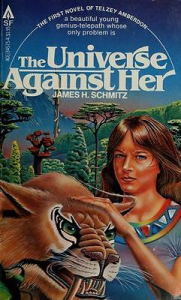 They are kind of fun. I see why I liked them when I was a teenager. I still like them, sort of. But I sure do wonder whether Schmidt realized, while he was writing these stories, what a really awful person his protagonist is.

If you haven’t read them, or if you have forgotten, let me remind you that Telzey, who is fifteen when the stories begin, is a psi. She’s a telepath. She is, in fact, a telepath who can quite easily read most minds, control them, make people forget things, insert false memories, and – here is the kicker – permanently alter their personalities. Which she does rather freely if she doesn’t happen to like someone; for example, the aunt with whom she is staying in the first of the stories. Yes, this aunt is unpleasant. Nevertheless, changing her personality so that she is nicer is, not to mince words, actually evil.

Telzey can crush someone’s mind and turn him into a vegetable. She does this to a bad guy in one of the stories. Yes, he is a bad guy. Yes, he tried to kill Telzey. Still, I can’t help but feel she was pretty casual about destroying his mind. Just how bad would a guy have to be before Telzey would feel she had the right to destroy his mind? From her casual manipulation and control of various others throughout the stories, I can’t help but feel it might not take very much for her. She might feel a little bad about it afterwards, but I’m sure she’d get over it. She sure doesn’t dwell on the liberties she takes with anybody’s mind.

Oh, she’s also a genius and pretty. A fan club of boys orbits her, but she has them well trained so they aren’t too annoying. [Insert eye roll here.]

Now, how common is it, do you think, for authors to kind of miss the fact that the protagonist they have created is actually not at all nice and possibly evil? I am not talking about morally ambiguous characters where the author purposefully created the ambiguity, like Janus in The Thousand Names or, say, Hugh d’Ambray now that he’s been re-interpreted as a better person. Or, or for that matter, Innisth in Winter of Ice and Iron. That kind of moral ambiguity is everywhere and mostly it’s a very good thing, adding depth and complexity to the story.

No, I am talking about characters the author apparently thinks are good people, who are actually bad people.

I can think of a couple other arguable cases.

How about Camber of Culdi?

In tough times, sometimes you have to get tough. Manipulate people, lie to them – or be a bit selective with the truth, let’s say. Force them into lives they hate, murder the odd person who stumbles onto your secrets, take the place of a dead friend for a few years and lie to everyone about who you are, that kind of thing. Oh, and also Camber is another telepath who has no trouble fiddling around with people’s memories. After all, it’s totally for their own good. Can’t make an omelet without breaking eggs. If the omelet is important, you can righteously do practically anything to get that sucker made. We sure see this attitude in real life, but it does not make for an actually righteous protagonist; rather the reverse. For self-righteously manipulating everyone around him, it’s hard to do better than Camber.

Is it possible to write a telepath who is a good person? Probably. Drop examples in the comments, please, because I’m blanking on that category.

I’m not sure I can think of another really unpleasant protagonist whom the author thinks is a good person. But I can easily think of an entire society that seems to be exactly that way.

The Black Dagger Brotherhood series by J R Ward is a “closed world” paranormal series. Vampires exist but the human world is unaware of this. The stories are romances, with one of the Brotherhood vampires being fixed up with a woman in each book, generally with relatively little plot given the length of the books. They’re quite readable stories, some more than others.

And, when I read the first eight or nine or whatever, I got the very powerful feeling that J R Ward has not realized what an absolutely repulsive society she has given her vampires. Every single aspect of their society goes beyond problematic to unspeakable.

The women are essentially property. They are so helpless and delicate and they have to be protected, and we wouldn’t want them worrying their delicate little minds with anything important. They live sequestered lives and their fathers or other male guardians decide who they will marry.

The men hardly have it better. Vampires train their soldiers in an incredibly abusive way that would not, by the way, be at all effective in creating competent soldiers. It’s great at making men into rage-filled psychos, though.

Astoundingly, this social system is not working out well for vampires, who are on the verge of dying out. I can’t help but wonder if that would be such a bad thing. I mean, sure, the official bad guys are sort of demonic, but still. Speaking as a normal human, I think the objectively best outcome of the series would be for the whole lot to wipe each other out completely.

Especially since vampires have another species they use as servitors. These servitors are happy happy happy to be of use, thus freeing vampires from the drudgery of making their own supper or doing their own dishes. The Golden Retrievers of sentient species, except that what is charming and sweet and appropriate in a dog is horrible in a species of happy slaves. If there were no more vampires, maybe those people could find their range of options expanding a trifle. It would certainly be worth a try.

… And I’m out. I can’t think of another example. How about you all? Either for telepaths who have the ability to control minds but are actually good people, or for books where the author seems to think their protagonist is a good person even though the evidence suggests the opposite?