I have somehow not really been in the mood for fantasy or SFF lately … well, I know why: it’s because I’m trying to finish a novel of my own and I don’t need the distraction of someone else’s secondary world. That is probably why I have been inclined much more to murder mysteries and historicals and occasional romances all summer, with the exception of recent releases in SFF worlds I’m already familiar with, such as Ilona Andrews’ Magic and Iron and Martha Wells’ third Murderbot novella and Liz Williams’ Inspector Chen novels.

Except for familiar SFF, I’m adding those books to my TBR pile, but I’m not reading them. Instead, I started a historical last night, one I’ve had on my TBR pile for a year or two. It seems okay – just about right for what I want at the moment – it’s by Lawrence Durrell. I’ve never read anything by Lawrence Durrell, but I know he was very highly regarded. When I was a kid, I read the delightful books by his brother Gerald Durrell, like A Zoo in my Luggage and all those. I have my doubts (perhaps unfairly) that I would like Lawrence Durrell’s most famous books, like the Alexandria Quartet, but this book is a WWII thriller, so that sounds much more approachable.

Let me show it to you, along with seven other historical novels I have lined up:

Though Methuen usually lived at his Club whenever he was in London it was seldom that he was seen in the bar or the gaunt smoking-rooms. This afternoon in June was something of an exception – and he surprised himself when he found that he was crossing the marble staircase by the porter’s lodge, to push open the swing doors which opened on the private lounge. He was in search of congenial company, he told himself, and added under his breath, “And I am not feeling very particular.” Four months in the jungles of Malaya had starved him for the sound of his own language and he was glad – yes, glad – to catch sight of old Archdale, the bore of bores, in one corner of the room.

I read a chapter or two of this one last night. It seems to be just the ticket for giving me something to read for the next week or so, while I try to knock out Chapter 23 of my current WIP and figure out whether there is going to be a Chapter 24 as well, or whether from Chapter 23 I can head straight to the dénouement. Since White Eagles is a WWII novel, it’s going to have plenty of tension, but I imagine the good guys will win. Meanwhile, the writing is smooth and good without calling attention to itself. Don’t you like the phrase “gaunt smoking-rooms”?

2. The Moonstone, by Wilkie Collins, 1868 (you see why I felt I had better include the year of publication for this list of books. Wow. A hundred and fifty years.) 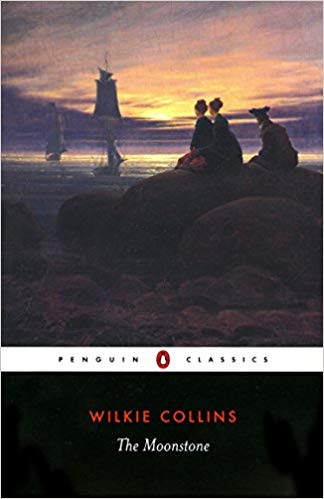 I address these lines – written in India – to my relatives in England.

My object is to explain the motive which has induced me to refuse the right hand of friendship to my cousin, John Herncastle. The reserve which I have hitherto maintained in this matter has been misinterpreted by members of my family whose good opinion I cannot consent to forfeit. I request them to suspend their decision until they have read my narrative. And I declare, on my word of honour, that what I am now about to write, is strictly and literally, the truth.

The private difference between my cousin and me took its rise in a great public event in which we were both concerned – the storming of Seringapatam, under General Baird, on the 4th of May, 1799.

I am actually about half through The Moonstone, a book that I find quite readable but not precisely un-put-downable. I have been reading bits of it for . . . I believe it has been over a year since I started it. I haven’t actually stopped, but its extremely mannered prose does not make super-compelling reading. Also, I have reached the point where the Moonstone has vanished and a young woman seems to be acting like a complete idiot about it. Complete idiots are not appealing to me, so this part is veeeery slow to get through. But I should definitely finish this book this year, because at 150 years old exactly, this is obviously the right year to read it.

The sudden and unexpected death of Sir Thomas Bertram, while abroad engaged on business relating to his various properties in the West Indies, could be a cause of nothing but sorrow, dismay, and consternation to the baronet’s friends in England. A just administrator, an affectionate parent, a devoted husband, and respected neighbor in the county of Northamptonshire where he resided, Sir Thomas must be missed sincerely by all; yet his nearest family were left in particular and extreme distress, since in so many matters his word had been accepted as final authority; without its head, his household hardly knew how to go on, or how to resolve the innumerable difficulties and perplexities which his loss had occasioned, yet which only he, it seemed, could resolve.

Like most people, I wouldn’t pick Mansfield Park as my favorite, but I am curious to see what Joan Aiken has done with it. By the way, that second sentence is eighty-six words long, in case you wondered.

It was her fortieth birthday. Madame Wu sat before the tilted mirror of her toilet case and looked at her own calm face. In her mind she was comparing it with the face she had seen in this same mirror when she was sixteen. On that day she had risen from her marriage bed early, for she had always been an early riser, and putting on her new chamber robe, she had come into this same room and had taken her place before the toilet table. She had sat in her quiet fasion, easily motionless, and had gazed at her young face.

“Can it be that I look the same today as yesterday?” she had asked herself on that first morning after her marriage.

I have read several books by Pearl Buck. She was such a good writer. As you can see, this is one of her China novels.

The cocks were crowing in the cool glassy darkness before the dawn. Their cry, thinned by long silent distances, crept faintly through the early chill; ghostly, menacing, full of danger and of promise. From the gray tower halfway up the hillside, the clock of a village church struck five.

Hilary pulled off her white coat, saw that it was splashed with blood, and tossed it into a corner of the floor. On second thoughts, she stirred it with her foot till the bloodstain came uppermost. This, she hoped, might indicate to someone that she did not want to see I again on her next call.

Mary Renault of course wrote the wonderful The King Must Die. I haven’t been so very keen on anything else of hers that I’ve tried, but I will try this novel and we’ll see. The blood stain is because the protagonist is a doctor, incidentally. This is probably not a thriller. That first paragraph is beautiful. Maybe the writing will keep me going if this turns out to be an angsty romance type of thing.

The Arabic Jew, or Jewish Arab, who owned the entire Middle East at the turn of the century passed his early life exactly has had his English forebears for six hundred and fifty years. At the family estate in southern England he was taught to care for flowers, especially roses. His parents died while he was young and his aunts and uncles moved into the manor to raise him. In due time he would receive his title and become the twenty-ninth Plantagenet Strongbow to bear it, merely one more Duke of Dorset.

I picked up the Sinai Tapestry quartet when it was free a year or two or three ago. I’m not sure what I think of this beginning. The next few paragraphs describe the ridiculous ways in which various parents in this family have died, leaving their children to be brought up by their various uncles and aunts. It’s a bit strange, rather darkly humorous, and so far I have absolutely no idea how “the Arabic Jew” ties into what seems to be a mannered British family.

7. Cranford, by Elizabeth Cleghorn Gaskell, 1853, so here’s another really old one.

In the first place, Cranford is in possession of the Amazons; all the holders of houses above a certain rent are women. If a married couple come to settle in the town, somehow the gentleman disappears; he is either fairly frightened to death by being the only man in the Cranford evening parties, or he is accounted for by being with his regiment, his ship, or closely engaged in business all the week in the great neighboring commercial town of Drumble, distant only twenty miles on a railroad. In short, whatever does become of the gentlemen, they are not at Cranford. The surgeon has his round of thirty miles, and sleeps at Cranford; but every man cannot be a surgeon.

For keeping the trim gardens full of choice flowers without a weed to speck them; for frightening away little boys who look wistfully at the said flowers through the railings; for rushing out at the geese that occasionally venture in to the gardens if the gates are left open; for deciding all questions of literature and politics without troubling themselves with unnecessary reasons or arguments; for obtaining clear and correct knowledge of everybody’s affairs in the parish; for keeping their neat maid-servants in admirable order; for kindness (somewhat dictatorial) to the poor, and real tender good offices to each other whenever they are in distress, the ladies of Cranford are quite sufficient.

Lovely writing. If you’re keeping track, that second paragraph, which is all one sentence, is one hundred and twelve words.

As the eighteenth century drew to a close, it seemed that all the European world was at war.

A newly widowed woman peered out the rain-streaked windows in hopes that the post had brought a letter from her younger son, which never came; a boy shivered on the deck of a sloop-of-war, sobbing silently in fear and loss as voices shouted in an incomprehensible language around him; a girl walked out of the cook shop where she had been bound, and made up a new name by the time she reached the crossroads.

All three will be met with, one by one, but my story really begins on a simmering June day in Palermo, Sicily, 1799, as two men stood in an archway under carvings of laughing demons. They gazed out at a young lady, each man with very different thoughts.

Okay, of these eight, I believe I find Sherwood Smith’s the most compelling, possibly because she is writing for modern tastes. Don’t you want to know about the woman with the son, the poor boy on the ship, and perhaps most of all that girl who walked out of the cook shop?

A lot of these are appealing, regardless of whether they are compelling in the gotta-turn-the-page sense. All of them look like they’re going to have just beautiful writing, as perhaps one might expect for the older ones given they’re still being read 150 years, or even a mere 70 years, after their first publication. Stylistically, as I said, I am not all that engaged by The Moonstone. The skillful writing is what keeps me coming back to it.

What do you all think of these?