These comments about Sunshine from recent posts, especially Pete Mack’s perspicacious comment about the Death of Marat being one component of a perfect cover for the book, made me remember that I have always kinda wanted to try to create a Death of Marat type of dessert. So I finally took a stab at that this morning.

This was not a complete success. I mean, the dessert – redefined here as a breakfast item – was very good and I will no doubt make it again, probably tomorrow. But it was neither as white and innocent looking as I might have liked, nor can I quite see how to get the filling to “explode” out of the dish when a spoon is poked into it. In this case, the filling was certainly completely passive and non-explosive.

Here is how it is described in the book:

I’d made this light fluffy looking number in a white oval dish with white high sides and presented the first one with a flourish to a group of regulars who had volunteered to be experimented on. Aimil was the one with the knife, and she stuck it in and the raspberry-and-black-currant filling had exploded down the side and over the edge of the dish onto the counter…

So you see how the explosiveness is obviously important.

Here is how my version looked on coming out of the oven: 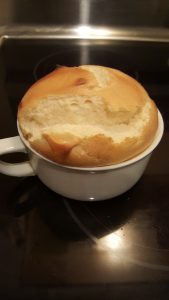 This is a perfectly nice soufflé, sure. But that golden top, is that okay for a Death of Marat? Opinions? If you made this a chocolate soufflé, that would not be an issue. But on the other hand, do you envision a chocolate dessert from Sunshine’s description? Or from the titular name? I feel it should be vanilla.

The basic recipe is from Richard Sax’s Classic Home Desserts. I modified it by using a plum filling (I had that in the freezer). I used a lot more filling than his recipe suggests, and I left out the cream because I happened to have used up the last of the cream yesterday (or I would certainly have included it). I also made 1/3 of the topping because I wanted just one serving.

Sax was not thinking about Sunshine’s Death of Marat and so didn’t use an appropriate filling. So after I give his recipe, I’m also going to suggest a more suitable filling that was created by another Sunshine fan, though I haven’t tried this filling myself.

(I cut all the soufflé ingredients to roughly 1/3 of the amounts given, plus I left out the lemon juice and zest)

Beat the egg whites until soft peaks form. Gradually add the sugar and vanilla, lemon juice, and lemon zest. Beat until stiff and shiny. Gently fold in the egg yolks and flour. Top the ramekins with this soufflé mixture. Bake at 450 degrees for 8 minutes, until puffed and golden.

Now, I must say, this soufflé was really good. Sax describes it as melting and unctuous. That is correct. Mmm. I used about 2 Tbsp of filling, or about eight times as much as suggested, but of course I did leave out the cream and butter. I did not feel this was too much filling for the amount of topping, which was 1/3 of the soufflé recipe above.

Now, here is a raspberry and black currant filling for a more authentic Death of Marat experience:

Add enough water to the currant preserves to make 1¼ C. Add the rest of the ingredients, Bring to a simmer and cook until thickened. Cool until you’re ready to use it.

I didn’t invent this filling, by the way, but the site where I got it from another Sunshine fan seems to have vanished. Fortunately I had copied it before that, so here it is.

If you are going to make an individual cobbler with filling you made ahead and chilled, I suggest you put the filling in the ramekin and then microwave it till it’s hot to make sure the bottom of the topping bakes though properly. I think this is important for a biscuit topping, but I’m not sure for a soufflé topping.

Either way, how can you get the filling to burst out of the soufflé when you poke it?

Plainly this is something to experiment with. If you try different variations, let the rest of us know how they work out!

4 thoughts on “Death of Marat”