Here’s a post by Jill Zeller at Book View Cafe: Difficulties with genre.

I have struggled with identifying genres for my novels and short stories. As an indie publisher, having never sold a novel to New York and only a dozen or so short stories to “pro” markets and others, I am in my own genre-identifying boat, and always lost at sea….

My fantasy–those with younger protagonists are written as Hunter Morrison–is “fiction with a twist”. In contemporary settings, fantastical elements of my own design are in play. There might be witches, ghosts or mages, but the Fae, vampirific communities, or rural settings in alternate worlds never appear. Generally my protags are ordinary citizens living in cities and small towns of twenty-first century America, with special powers they have grown up knowing about and using in small and convenient ways, and who, painfully and with sacrifice, come to understand that their abilities are far more powerful than they ever imagined. Indeed, their actions and choices with this knowledge generally leads to averting widespread destruction. And, romantic threads are always woven through.

Well, I haven’t read any of Zeller’s books, but this sounds to me like a pretty easy call. I say that this description fits contemporary fantasy. That’s the genre. The thread of romance makes no difference whatsoever.

Now, if this was a primary feature rather than a thread, I might call it fantasy romance … but I would probably still just call it contemporary fantasy, just as I call Sharon Shinn’s Blessings books secondary world fantasy.

Now, Zeller agrees that “contemporary fantasy” is often the label she picks.

What do I say when called upon to write a blurb for marketing or the back cover? Mostly I fall back on contemporary fantasy but that doesn’t feel quite right.

It feels right to me. Because as far as I’m concerned, that is a big, highly variable genre. Or subgenre. Whatever you want to call it.

This makes me want to establish, or at least hint at, the variability of contemporary fantasy. So:

a) On one end, blending gently into magical realism: Sarah Addison Allen. The world is barely distinguishable from our world, but there are distinct traces of magic, which are recognized as unusual by the people who have these gifts or who are affected by them.

b) We also have novels like Bone Gap, which are very much set in our world, only with mythology underlying or hidden behind the contemporary world. The Raven Boys would also fit in this sub-sub-category.

d) And then we have worlds that are hardly contemporary at all because the changes turn out to be so extensive, such as Sunshine by McKinley.

Sunshine’s got a new cover, I notice. What do you think? 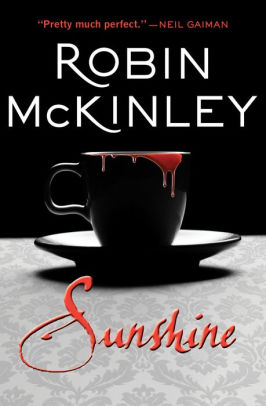 I don’t know, I sort of like it, but I don’t think it necessarily fits the book very well.

Anyway, then contemporary fantasy grades off into Urban Fantasy and Paranormal, which to me are virtually the same subgenre but with more of an emphasis on romance in the latter.

What do you think? Do all those types of stories seem to fit easily into contemporary fantasy? Or are we getting too far from “contemporary” when we reach books like Sunshine?

Here’s what Amazon says about one of Zeller’s books, Finding the Eye:

Using a peculiar camera she found, Maxine Nutbeam photographs her cousin’s life-sized horse sculpture and it comes to life. Coming from a long line of Nutbeams possessing erratic, careless magical abilities, Maxine encounters the camera’s owner Dante, whose supernatural skills as a Time Mage surpass even Maxine’s vivid imaginings. Rushed headlong into sorcery, danger and chaos, Maxine uncovers her mother’s secret and the mystery of her own birth. She is having the time of her life, but time is running out.

To me that looks like it definitely fits into contemporary fantasy without any trouble.

Has anybody happened to try this one? I’m not (in general) crazy about time travel elements in most stories. Also, the name “Nutbeam” turns me off — it sounds just too silly. But I do like the idea of the sculpture coming to life.

5 thoughts on “Name that genre”