At tor.com, Brian Switek writes: Which Dinosaurs Would Be Effective on the Battlefield?

Not that I would care to rush into battle, dinosaurs or no dinosaurs, but still, what an image is immediately conjured up!

An enormous, excessively-fanged theropod would be the obvious choice. We’ve all daydreamed about clambering atop a Tyrannosaurus to vanquish our enemies. (Right?) But there are two problems with this plan. The first is that the carnivore might be just as likely to eat you as your enemy. A morsel is a morsel to a hungry carnivore….

Training, my friend. Training. Or how about telepathic bonds with animals that look like Tyrannosaurs but think just like dogs? — always popular to give everything animal-shaped a dog type of personality in a fantasy world, yes? (Or give it a human personality and psychology, of course; even more popular.)

Despite Switek’s comment about the lack of battle-wolves in real life, he is mistaken, of course. We all know that the Romans bred and trained molossid dogs for war, and how different is that, eh? So this argument that carnivores can’t be bred or trained for war is thin.

Still, I have nothing against herbivores.

Milán gets it. In his fantasy world, most of the war dinosaurs are herbivores that stomp around on all fours—crested hadrosaurs, horned dinosaurs, and the armored ankylosaurs. They seem like suitable stand-ins for dragons. …

They do! Just breed in fire-breathing.

Switek actually votes for Triceratops. And he gives the delightful little dromaeosaur Microraptor a call out, which is great! I have a great fondness for Triceratops and a greater fondness for Microraptor, but I must admit I would think first of some of the megafauna mammals rather than dinosaurs, just because I happen to love Daeodon even more than dromaeosaurs and to me Daeodon looks perfect on the battlefield. 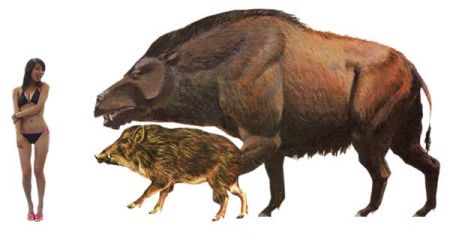 I’ve always loved Daeodon (the big one, obviously). Don’t ask me. I am also fond of warthogs, which I think are very cute (really).

There’s just something about this giant pig-cow type of animal that I enjoy, plus I can definitely see a mass of cavalry thundering over the horizon on these immense, heavy, big-jawed animals. Agile, too, I bet, with those relatively long, slender legs. So I get that the post was about dinosaurs — click through and read the whole thing and then you can daydream about glorious battles with flags flying above and triceratops pounding the earth below.

But c’mon, don’t you really want to see Daeodon in a battlefield movie too?

2 Comments → My type of war