I happened to check to see if the television miniseries of The City and the City had ever been made.

Turns out yes: The City and the City review – sci-fi meets crime fiction in parallel worlds 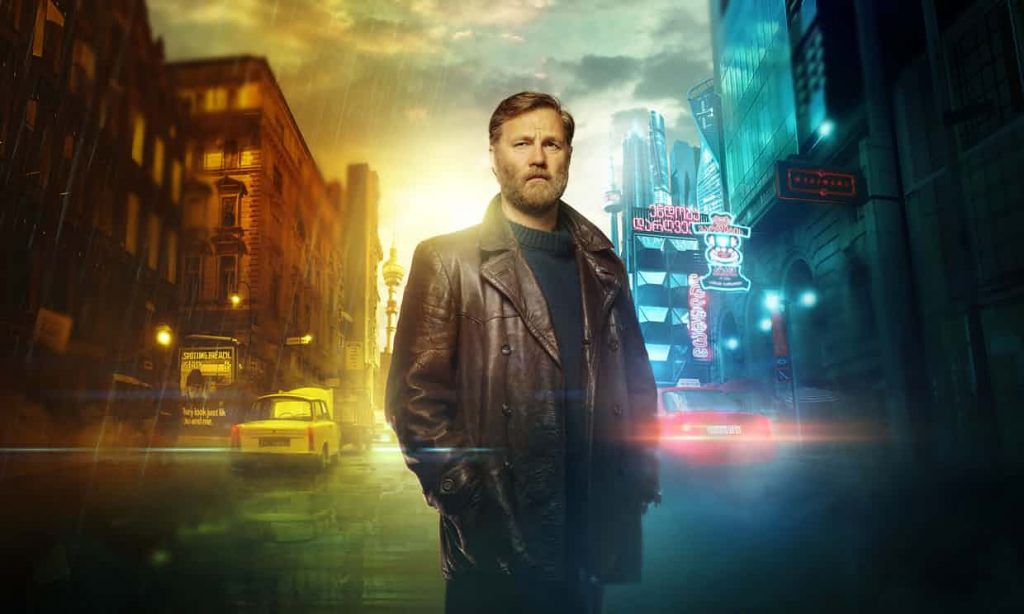 Where we are is not locatable on any map. Although two maps, one placed on top of the other, then held up to the light, might be of some help. This is The City and the City, a four-part adaptation of China Miéville’s award-winning, sci-fi/detective-fiction hybrid that began on BBC Two last night. It’s about the murder investigation that ensues when a foreign exchange student turns up dead in the fictional European city of Besźel. Or is that the fictional European city of Ul Qoma? Or perhaps both at the same time? … In this shadowy, chimeric place, the square-shouldered David Morrissey is an almost comically solid presence as Inspector Tyador Borlú. He has a weakness for the company of his wife (Sherlock’s Lara Pulver playing another mysterious woman), but is an otherwise gruff, by-the-book cop, dogged in his pursuit of justice. Borlú? Get caught breaching in the disputed zone? Don’t be so bloody daft!

This review gives the series, which came out this past spring, three stars. Well, I would like to see it. But it is so far available only from Amazon UK, not Amazon US.

That sort of thing does puzzle me. Wouldn’t the producer or whomever make a ton more money selling the DVDs more widely? Why restrict your profits that way?

Anyway, I am considering ordering the DVD from Amazon UK. It would be a little more pricey, I expect, but I checked and my laptop is actually set to play DVDs from Region 2 already, so I think I could watch the show without having to fiddle around with laptop settings.

I really did like this book a lot, and I really am interested in seeing how it was translated to visual media, so even though I never seem to get around to watching DVDs, maybe I’ll pick this up.

I don’t suppose any of you have already seen this series?

Here is another review in case you are interested.

Here is another that I found helpful for the additional detail it provided:

The first ten minutes or so are a bit rough, especially for readers of the novel who may be surprised by how incredibly faithful it is to the novel one moment and how it goes off on its own tangent the next: there are major additions to the cast of characters and story. This makes sense: the episode was longer than the standard hour (I didn’t get the exact runtime but it seemed to be around 65-70 minutes) and there are four of them, which means the TV show is in the unusual position of having more time to tell the story than the relatively short novel has (which barely scrapes 300 pages). The new material is, for the most part, well-judged and intelligently deployed. Giving Tyador a wife seemed an unnecessary change, but by having her vanish in a suspected act of Breach immediately personalises the strange situation in the city: rather than the split (and Breach) being remote forces Tyador is aware of, they are instead deeply personal affronts that frustrate him. It gives the premise an immediacy not present in the novel but which works wonderfully on screen.