So, I recently finished reading all of Beverly Connor’s Diane Fallon mysteries, so I guess this year is officially Beverly Connor Year for me. 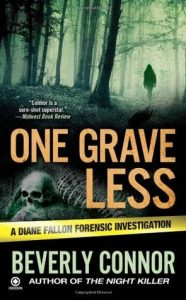 Prior to reading this series, earlier this spring I read her Lindsay Chamberlain mysteries, a series which includes:
A Rumor of Bones
Questionable Remains
Dressed to Die
Skeleton Crew
Airtight Case

The vast majority of the books on my TBR pile got there because of a recommendation from someone here or from one of the handful of book bloggers I follow, but I read all these after happening across the second of the Lindsay Chamberlain series at a library book sale, so it only goes to show that random chance still occasionally plays an important role in my reading life.

These two series are similar, which is fine since obviously I was in the mood to read a lot of similar murder mysteries. Both series have a mature woman as the protagonist. Both are based in Georgia, though many of Lindsay’s books take place elsewhere as she travels a good deal. In all the books, forensics is very important and lots of science is worked into the stories, but not so much that the reader feels like they’ve picked up a textbook by mistake.

What you can expect from all the books in both series:

a) A real mystery. I almost never figured much out early. I was almost always baffled by what was going on. There was one important exception I can think of, but in general the mystery-qua-mystery is excellent. Occasionally a deus ex moment gives the good guys a bit of a boost, but generally this is not too egregious (in one book, a little more egregious). Specific plot elements made me prefer one book or another, or did not appeal to me as much in one book or another, but I don’t think there are any real low points in either series. All the books are good in both.

b) Cool forensics, plus either cool crime lab stuff or else cool archeology stuff. Occasionally both. Really enjoyed all these elements. Also, now I know how I would dispose of a body if I really wanted to make sure it wouldn’t be found. [Feed it to pigs. Apparently pigs will eat the whole thing, including the bones. I wouldn’t have guessed that. I know hyenas can crush and eat big bones, but pigs? But now I know. Plus, pigs are probably easier to keep than hyenas if you don’t want your neighbors to be suspicious.]

c) Lots of action. In every book, you can expect the protagonist and perhaps others to be involved in one exciting situation after another. Neither protagonist is stupid about danger . . . at least not very stupid about danger . . . but, damn. If it were me, I would load up with two guns, two flashlights, and two Dobermans. One of anything probably wouldn’t be enough.

d) Protagonists who are competent, but not too unbelievably super-competent. What I like best is that when Lindsay or Diane fights off an attacker or gets away from a kidnapper or whatever, this is not because they are so very special. It’s because they fight really hard and keep fighting till they get away. If their attacker shouts, “I just want to talk!” or “I’m not going to hurt you!” they keep fighting. I appreciate this very much. I have no patience whatsoever for a protagonist, especially a female protagonist, who, when attacked, dithers and wrings her hands and practically has the word “victim” painted on her back.

e) Basically competent and well-developed secondary characters. I don’t much care for the sort of mystery where the archaeologist (or whoever) solves the mystery because the police are too stupid to solve anything. The protagonist shouldn’t shine only because most of the secondary characters are ridiculously incompetent. That doesn’t happen here. Sure, the police may be out of their depth with some of the science, but they’re generally pretty competent. Also, I especially like Diane’s boyfriend/fiancé Frank, who several times solves a particular sort of intellectual problem because he’s better than Diane at that kind of thing. I also really like Lindsay’s eventual boss, who wasn’t quite what I was expecting (in a good way).

I should add that one exception to the generally high level of competence is the tendency of most characters to say, “Of course, this could just be a coincidence.” Uh huh. Sure. A coincidence. The example I thought was stupidest was when someone suggested, apparently seriously, that perhaps Murderer A threw away his boots and Murderer B happened to pick them up and wear them at a completely unconnected crime scene. Rather than laughing hysterically, the other characters actually thought this might have actually explain why the same boot print was found at both scenes. Uh huh. Sure.

f) A bit less of an epilogue than you might want. For example, one book ends with the discovery of a gruesome crime that is never mentioned in the next book. Worse, at the end of one book a secondary character was kidnapped and really scared, though not hurt. There is no emotional fallout whatsoever from this situation in the next book; in fact the incident is never mentioned again and might as well never have happened. I was pretty startled by this, as Connor is generally better than that with continuity. It was disappointing to me, as I was quite interested in how the character would handle that. In another case, the protagonist suffers from major slander and sues a tv station that spreads the lies about her. I would have loved to see the outcome of that lawsuit just for my own satisfaction because the tv station’s behavior was truly outrageous.

What you can expect from the actual writing:

a) Unfortunately, Beverly Connor and I obviously have a philosophical disagreement about the use of the past perfect. I think it should be used where appropriate. Connor thinks it should be used only when absolutely necessary and sometimes not then. That final clause is the problem: because of what appears a reflexive avoidance of the past perfect, sometimes her use of the simple past tense produces sentences that are awkward or even a little bit confusing.

I’ve seen this kind of writing before, of course, especially in genre fiction written since, I guess, about the late nineties. Obviously some authors, copy editors, and editors are used to this style and like it. That’s too bad, as the avoidance of the past perfect produces writing that is objectively not as smooth or clear. Here is a discussion that provides great examples of the simple past and past perfect, illustrating how these verb tenses can be used effectively in flashbacks. In fiction, we often use a ton of flashbacks to work in backstory, both in fairly extensive passages and in short one- or two-sentence passages. This is the situation where the past perfect is most useful and helpful in improving sentence and narrative clarity.

Also, Connor just has a few other writing quirks that bother me. She uses “may have” when she ought to use “might have,” for example. Here is a discussion of the difference. I get that this is trivial, but remember I read all nine of the Diane Fallon books in quick succession. That means about the fifth or sixth time I saw “may have” in a sentence where “might have” would have been better, I got sensitized to it, so I noticed it for the rest of the series.

b) Otherwise, I think Connor’s writing is solid and straightforward. She has a lot of brief transitions that are boring (Then they ate pizza and went to bed. The next morning …) but, as noted, this kind of thing is brief. Before you know it, you’re on into the next interesting scene, so you never have time to get bored. At least, that was my experience.

Connor’s dialogue is generally pretty good and sometimes very good – I’ve noticed before that good dialogue is important to carry me past writing quirks that would otherwise stop me from enjoying a book. Connor also writes good exposition, which for me also serves this purpose. Someone less interested in the science embedded in these books might not find that to be the case.

c) Wow, absolutely masterful use of cliffhanger chapter breaks. This was especially noticeable in One Grave Less, which is a crossover between the Diane F and Lindsay C series. Because the chapters mainly alternate between the two protagonists, Connor is able to leave each character in a crisis when she switches to the other. This is very much the kind of book that can keep you up all night.

What’s coming up from Connor:

Both series are continuing, to my surprise. Because of that crossover, and because of an important plot development in that book, I figured at least the Diane Fallon series was going to end there. Nope. Though that book provides a natural endpoint, from Beverly Connor’s blog, I see that the next Diane Fallon series is going to continue. The next book is going to be called Blood Evidence. She’s also going on with the Lindsay Chamberlain series; the next book for that one will be called Kill Site.

Well, that’s excellent. I will definitely go on with both series.

Connor is also working on a fantasy novel called Song of Stones. That will be interesting. I wonder how much her extensive mystery background will inform that fantasy novel? Maybe it will be a mystery with a fantasy setting? Historical or contemporary or secondary-world fantasy, I wonder?

In the meantime, she and her husband have co-written a couple of stand-alone mysteries. Maybe I’ll try those, because I’m definitely not bored with these mysteries yet.