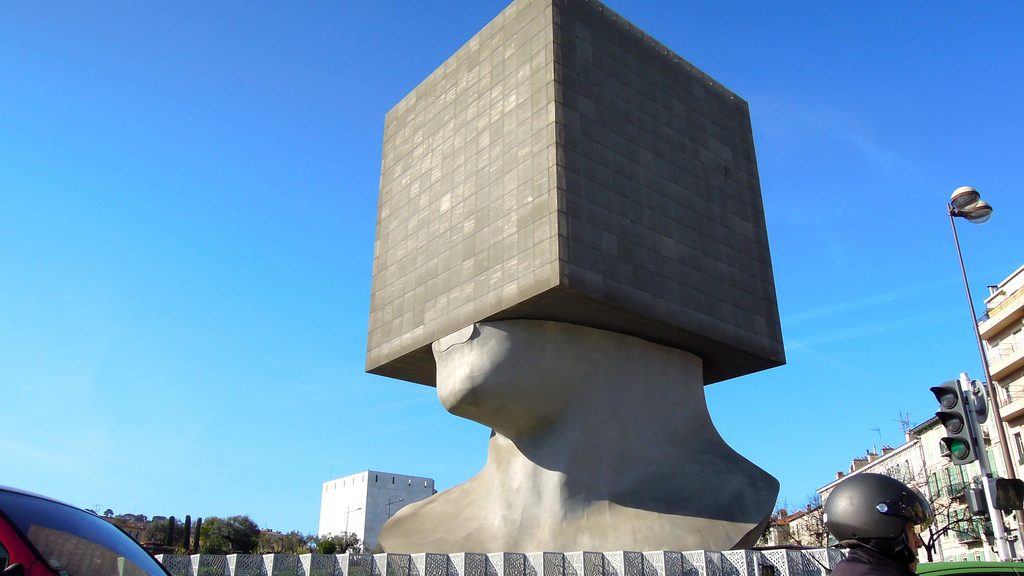 This is called, unsurprisingly, the Square Head Building. It’s in Nice, France. Just right there in the middle of all the normal buildings. The bus drove past it without the slightest comment from the driver or tour guide. Just a giant square head thing, not worthy of notice, I guess?

It was apparently build in 1989 as part of a larger art project, then converted from a sculpture into a habitable building:

The architect in charge was Yves Bayard. The theater and museum were built, but for the library the city had no more money left and for over 10 years, there was a kind of empty closed space waiting for the finalization of the original project.

Meanwhile, the architect Yves Bayard worked with his friend Sacha Sosno to realize a crazy idea: transform a sculpture in a building where people could live! The very first habitable giant sculpture!

At the end of the 1990’s, the project of the city library could finally be continued and the most spectacular part of the new plans was to make a giant building out of Sosno’s famous sculpture called “the square head”, where the administration and offices of this cultural complex could install their headquarters.

So, apparently the square head accommodates offices for library administrators. How would you like to have your office in such an odd building? Apparently the construction materials are opaque from outside, but transparent from inside, so the people in there can see out. It must seem like tourists are staring straight in at them all the time. Very strange work environment, I expect.