I’m revisiting this topic because I recently read a romance that offers a really great father/daughter relationship. Not central, of course, because this IS a romance. The central relationship is obviously between the female lead and the male lead. But the female protagonist happens to have solid relationships with both her mother and her father, and these relationships are important to the story. 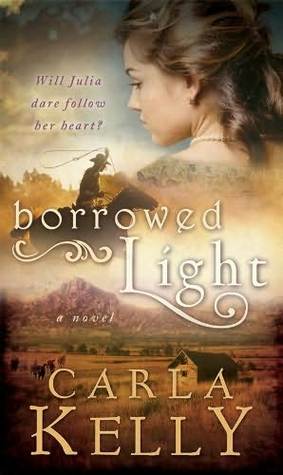 I said in the previous post on this topic that I’d read three of Carla Kelly’s novels and in all of them the father was pretty bad to terrible. Well, not in this one.

In Borrowed Light, we have Julia Darling, whose father is the vice president of a bank and whose mother is affectionate and intelligent. Both parents are drawn well. The solid family bonds are, as I said, important to the overall plot even though we see the parents only briefly in the beginning and then a little more extensively partway through the novel.

Despite her good relationships with her family, Julia is unhappy because she’s engaged to a man she doesn’t much like. A graduate of the Fanny Farmer cooking school, she answers an add from a rancher in Wyoming who’s looking for a cook. And so the story unfolds.

Things to love about this story:

1. The characters. Julia is a sympathetic protagonist, genuinely nice but not unbelievably saccharine. Because of her background, she has a good deal of confidence and good sense — but she does have some growing up to do. The male lead, Paul Otto, is quite possibly the nicest guy I’ve met in literature this year, but again, not in an unbelievable or saccharine way. The secondary characters are complicated and interesting and generally quite likable. Again, the family relationships. I particularly liked how Paul Otto related to Julia’s father when they met.

2. The setting. Carla Kelly makes me believe in her stories because they’re set on such solid foundations.

3. The treatment of religion. This story is, I guess, aimed at a Mormon readership. I gather the publisher is a Latter Day Saints publisher. If I’d known that, I might not have been inclined to pick this book up, but actually I found that Kelly perfectly captures the centrality of religion and spirituality in the early 1900s without losing any of her skill with character or setting. Quite the reverse. I don’t think the reader needs to be all that familiar with LDS beliefs to thoroughly enjoy this story.

4. This is a book without a real villain, but there’s plenty of tension. Life was sometimes pretty tough in the early 1900s. Kelly kept my attention all the way through.

5. The writing. Many delightful details. I thought naming a character “Julia Darling” was ridiculous — until it turned out that Mr. Otto addresses all his employees just by their last name. Hah!

1. The denouement was a touch predictable, though still a pleasure to read.

2. I did not really find the character arc that Kelly gave to James, the boy taken in by Mr. Otto, very persuasive. Some of the details of that sub-plot just did not really work for me.

Overall: Totally charming. I’m looking forward to reading more by Carla Kelly, including quite possibly the next Latter Day Saints book in what is apparently a loosely-linked series.