In A Long Desire, Connell describes some of the great explorers of history. Also some of the craziest and some of the most vicious. Connell’s essays are suffused with this wonderful tone of understated irony as he details these absolutely hellish journeys into, for example, the depths of the Neotropics. Particularly striking are his explanations about the way these explorers often sought wonderful places or great treasures on the flimsiest and most remarkably ill-founded rumors. 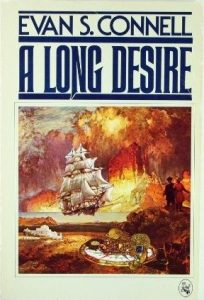 For example, Connell describes the search for the Seven Cities of Cibola, founded by seven Portuguese bishops – the tale of how that legend morphed and grew and changed over time is a testament to the power of wishful thinking. The seven cities were at first supposed to be on an island. One presumes it would have had to be quite a large island if it had room for seven cities, especially wealthy cities as the legend claimed. But later, when no such island could be found, says Connell, the legend made a different claim: By the early sixteenth century they [the cities] were thought to be on the American mainland. Why? Nothing could be more obvious. These cities existed – obviously they existed, otherwise men would not be searching for them; consequently, if they did not exist in the Atlantic, they must be someplace else, and beyond the Atlantic lay America . . . but they could not be found on the littoral, which meant they must be inland. This brings us to one of history’s classic bunglers – a most unpleasant personage even among odious companions, the conquistador Pánfilo de Narváez.

The tale (after a good many complications) continues, Narváez landed on the west side of Tampa Bay in April of 1526, authorized by Charles V to “conquer and govern the provinces which should be encountered from the River of Palms to the cape of Florida.” He had 42 horses and about 600 men, but not for long. First he divided his forces, ordering his ships to proceed up the coast. Then he led his cavalry and infantry into the swamps. Accidents, alligators, snakes, dysentery, malaria, hunger, and misanthropic Indians began to pick them off. …

Nearly all of them died miserably, of starvation and disease. Four lived long enough to be made slaves by one or another native tribe, eventually escaped, and, eight years after the expedition set forth, finally made it to Mexico City.

Eight years. It’s hard to wrap your mind around, it really is. Yet this book is filled with stories like that. It’s particularly remarkable how many men barely survived one expedition only to turn around and plunge back into the jungle on another mad search for conquest and treasure.

On the other hand, every now and then the tales of tremendous treasures were actually true, which I suppose does go some way toward explaining this enthusiasm to engage in horribly dangerous and amazingly uncomfortable journeys of exploration. The success of treasure hunters was, of course, often more to be mourned than their failures. I knew the Spaniards melted down a lot of Incan gold, but I had no idea what an atrocity they performed in strictly artistic terms until I read Connell’s essay “GoldGoldGold.” Listen to this:

Replicas of Indian corn, each gold ear sheathed in silver, with tassels of silver thread. Innumerable gold goblets. Sculpted gold spiders, gold beetles, gold lobsters, gold lizards. A gold fountain that emitted a sparkling jet of gold while gold animals and gold birds played around it. Twelve splendid representations of women, all in fine gold, as lovely and complete as though they were alive. And the sandals, or slippers, that women like – these were reproduced in gold….The list goes on and on … until one can hardly relate all of what was there. Nevertheless, after the death of Atahualpa, some Inca nobles poured a bucket of corn out in front of the Spaniards, and one of them picked up a grain and said, “This is the gold he gave you.” And then, pointing at the heap on the ground, “This much he has kept.”

And a page or so later, again:

Sarmiento writes that in the Corichancha [the Golden Enclosure, a temple complex] every utensil, every ornament – everything – was either silver or gold: religious censers, ewers that held sacrificial water, the pipes that conducted water through subterranean channels, even the agricultural implements used in the gardens.

And at the heart of this spectacle, surrounded by the various shrines, stood a perfect replica of a field of maize, each stalk carefully contrived of gold and planted among golden clods. Here, too, on good authority, stood at least twenty-three life-size llamas with their young, all made of gold, with life-size Indian shepherds to guard them, each shepherd fashioned from gold, each with a golden sling and a golden crook.

Okay, if you put all that in a fantasy novel, it would just not be believable. Not unless you put it in a magical Fairy kingdom. You couldn’t put in stuff like this and get readers to believe it had all been made by ordinary people. A field of maize, all made of gold! Golden spiders and beetles and life-sized llamas with their shepherds! Golden clods of dirt! No one would believe it.

That it all really existed and really was wantonly destroyed and then was actually – much of it – lost at sea … well, that last part serves the Spaniards right, I guess, but it’s a painful thought nevertheless.

A Long Desire is best read in small doses so that you have time to absorb the occasional heroism and remarkable doggedness, the frequent depravity and the scope of disasters, the pathos and tragedy, and most of all the sheer, remarkable distance between the past and the present. The attitudes and actions of almost everyone featured in Connell’s essays are literally almost unimaginable today. If I were teaching history, I’d probably find a part of this book to use – perhaps the part about the Children’s Crusade. The past is truly a foreign country. Essays like this make that plain.