Remember that find a few years ago, fourteen complete specimens of a previously unknown hominid species, named Homo naledi? The ones found in the cave that you had to creep through a ten-inch-diameter passage to get to?

If you don’t remember, here is the excellent National Geographic article about the find. Click through and read the whole thing if you haven’t yet. Great story about an amazing find.

Here, from that article, is a summary of the characteristics of H naledi: 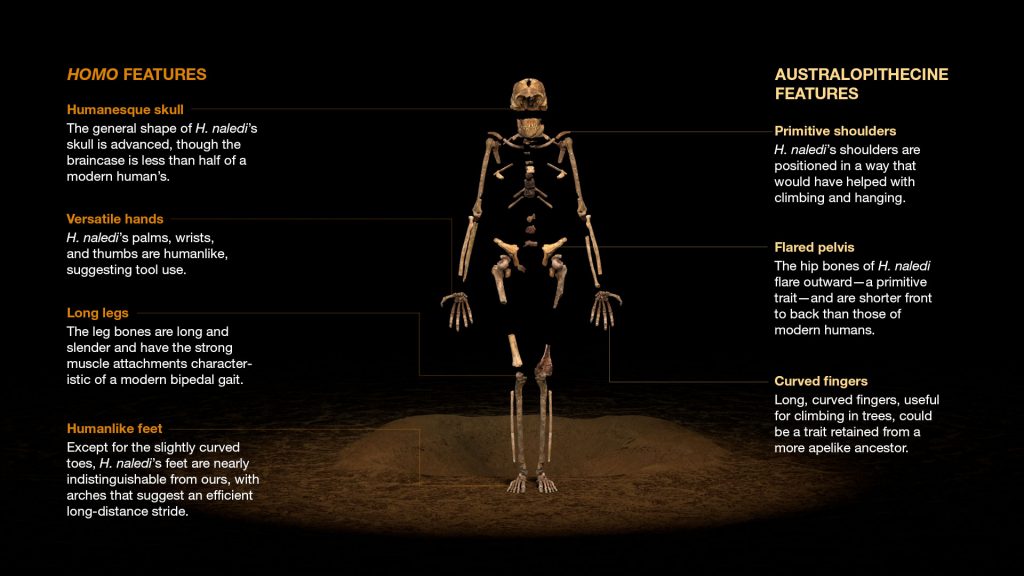 Now, I wouldn’t consider this definitive — so much in paleontology is subject to revision — but if you’ve been following along, you may have run into one of the articles about the age of the fossils. They seem to be much, much younger than immediately assumed — like 200,000 to 300,000 years old. This means that this species may have overlapped with ours. Here is a good article at New Scientist about that.

Now, here’s a new article at Ars Technica about the brain of H naledi.

Homo naledi’s brain may have been small, but it looked surprisingly similar to ours, according to a new study that suggests that structure may have come before size in the evolution of hominin brains.

Measurements of skull fragments indicate that Homo naledi’s brain was about the same size as that of an Australopithecine—the genus of primates that lived in Africa 2 to 4 million years ago and may be among our early ancestors. Yet the diminutive species was present in Africa long after the Homo lineage appeared and may have overlapped with modern humans. So how it fits into our family tree is not clear.

A new study reveals that, despite the size, Homo naledi’s brain looked quite different from Australopithecus’ and much more like ours, at least in some very important areas.