At tor.com, this post from Foz Meadows: 5 Potentially Amazing SFF Adaptations That Need To Happen

I know your first response!

SO MANY CHOICES HERE. Yes, absolutely, I bet we could all come up with 100 books / novellas that would be fantastic as tv shows or miniseries or movies. Let’s first see what Foz Meadows picks …

1. PERN! Okay, yes, that would be delightful. Who doesn’t love telepathic dragons? The plotting gets unbelievable in places, but hey, for movies, that’s totally par for the course.

A Bioware-style RPG based around fighting Thread. The concept of Impressing a dragon, with all the different colour and gender combinations available, is perfectly suited to giving a custom character different narrative options, regardless of whether who you Impressed was decided by a random dice-roll, your resting place on a sliding scale determined by prior in-game actions, or a simple player’s choice. As in Dragon Age: Origins, players could choose from a series of backgrounds with alternate entry points into the same story depending on whether their protagonist comes from Hall, Hold or Weyr. The overarching plot could centre on a mix of Hold/Hall politics and the search for ancient technological artefacts, with bonus sidequests about running various missions, recruiting potential riders, Harper Hall spying and collecting/apportioning fire lizard eggs. Dragon powers like timing it and going Between could work as in-game combat abilities, while romance options could be intertwined with—though not wholly dependent on—dragon pairings. …

Interesting! I never think of game options, but a game based on Pern sounds great.

2. Court of Fives by Kate Elliot. Fine, I don’t know, I haven’t read it. I’d be pleased to see JARAN made into a movie, though.

3. Seanan McGuire’s October Daye series. I guess? I read the first couple, but if I were going for an UF series, this is not the one I’d vote for.

4. Archivist Wasp, by Nicole Kornher-Stace. OOOH! JUMPS UP AND DOWN! Yes, this would be great.

Archivist Wasp is the perfect length for film, and premised on the sort of compelling, dystopian uncertainty about what’s happening now and why things broke that worked for All You Need is Kill (filmed as Edge of Tomorrow/Live. Die. Repeat.) and I Am Legend. In fact, you could arguably pitch it as a blend of the best elements of those two stories, with just a pinch of (seemingly) magic. In a harsh, barren future, Wasp is forced to capture ghosts to try and question them about what happened to the world—a largely futile task, as most ghosts are incoherent. But when one ghost proves stronger, fiercer, and more lucid than the others, going so far as to ask Wasp’s help in finding his companion, Wasp follows him out of her body and into the world of dead. Aided by her access to his disintegrating memories of what happened before—flashbacks of an unknown time that steadily lead them onwards—Wasp comes to question everything she’s ever been taught about the world that remains and her bloody, brutal place within it.

5. The Beka Cooper trilogy, by Tamora Pierce. Another jumping-up-and-down moment, but not as excitedly because I don’t want to wear myself out. This is a long trilogy, by far my favorite of Tamora Pierce’s books

[T]he idea of a feudal police drama with magic, with each season built around the events of a given book, is appealing as hell. There’s a reason urban fantasy adapts so well to TV, when the people in charge understand its peculiarities: the procedural elements translate well to an episodic format, while the worldbuilding provides extra narrative avenues as the story progresses, and used together, the two things pull in harmony.

Okay, so, that’s three enthusiastic YES THIS responses from me, one sure-but-how-bout-something-different, and one meh, whatever. Not bad, actually!

You all know what one work I would most like to see turned into a miniseries or movie, right? 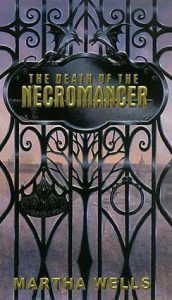 Yes, The Death of the Necromancer.

What one work would you most like to see translated into tv, movies, or games?

5 thoughts on “SFF Adaptations That Would Be Amazing”