I did get some actual writing done this weekend because Cavaliers went in the ring quite late all three days. It’s the sort of writing where you start with 186 pages and fiddle around for three hours and get a lot done and wind up with 180 pages … like that. I am about finished fiddling, after which I should be able to start moving forward again. That will be nice.

But every afternoon, I drove to Purina Farms, showed Conner and Leda, and drove home. 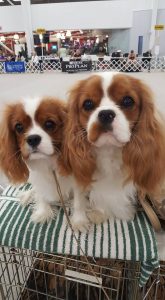 Then I just hung out doing nothing much the rest of each day. I’m not an evening person anyway, and driving long distances make me tired and often a bit head-achy.

It was a worthwhile weekend, though. Conner picked up three more points by getting Best of Winners each day. Good job Conner! I was not surprised at all. He really is a handsome young dude and very, very few judges seem to care about that mustache of his. He has nine points now, so he has caught up to his litter-sister Kimmie. He took twelve one-point shows to do it, whereas unbeatable Kimmie did it in nine straight shows. Now they each need just six points to finish their championships, but they have to get them three at a time, as “majors.”

Leda, Conner and Kim’s 9-month-younger sister, got Winners on Saturday, so that was her first point. That judge liked her structure and movement and general type enough to forgive her iffy bite. I was a bit surprised and quite pleased. She is a very nice puppy and shows VERY well given her age (7 months) and level of training (zero). (I do appreciate a puppy who is a born show girl and makes me look like a great trainer instead of a totally lazy trainer.) Naturally I made a note of the judge, though I don’t know that he would decide the same way if Leda were older. Judges are sometimes more forgiving about bites in puppies because they know the bite can change (and I sure hope it does, in the correct direction).

Well, I was showing as much as possible recently because the point schedule changes on the 16th of this month. After that date, till this time next year, in Missouri and Illinois, it’ll take ten girls entered at one show to make a 3-point major in girls. Eight boys, which is even less likely because there are almost always (many) more girls entered than boys. Those numbers are hopeless. I haven’t seen more than four to six girls entered anywhere near here for more than a year — generally fewer. I don’t plan to enter any more shows in Missouri or Illinois this year and I most sincerely hope no one else does either. Let the AKC bring the points down to some reasonable level if they want entries from Cavalier people in this region.

Meanwhile, in Arkansas, it’s only 6-6 for a major — that is, six boys or six girls. That makes Arkansas look sooooo inviting. Kentucky and Indiana need seven girls, which is also not bad. I spoke to another Cavalier person this weekend and traded contact information. I believe we will be arranging to enter as many of our girls as possible (five between the two of us) in one or two Arkansas shows. With luck (and one more entry from some random person), we will build a major and then win it. I could honestly see Conner and Kimmie finishing together in just one weekend, Kimmie to make the major in girls and Conner beating her for Best of Winners even if he is the only boy entered. That means he would “cross-over” so that he would also get a major. Then I could pull Kimmie out of any remaining shows to give other girls a chance to win. (You see I immodestly expect Kimmie to beat all other girls. Well, Kimmie is really very pretty! Plus I am probably a little tiny bit biased. And a bit overly optimistic.)

Here are a few of my favorite shots from this weekend’s show. That Golden just happened to look wonderful at the moment I snapped the picture. The others are a Kerry Blue whose handler posed her for me, a Papillon who posed on his own, and a Beauceron puppy who was just ultra charming but difficult to catch in a microsecond of stillness. 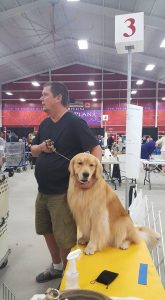 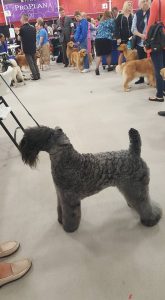 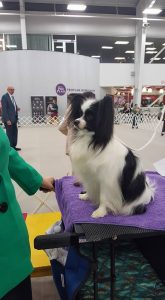 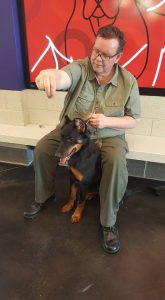 4 thoughts on “Show Shots From This Past Weekend”