So, Precious Dragon is the third book in the Inspector Chen series, set in Singapore Three. And Hell. Quite a bit of this one is set in Hell. 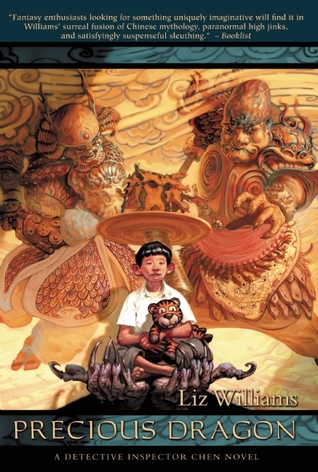 I went on with this series largely because after I posted about the second book, Pete Mack said that both Heaven and Hell were going to come under new management and then the general situation would start to improve. This was exactly what I needed to hear, because the general worldbuilding was pushing some of my claustrophobia buttons. This is not literal claustrophobia; it has to do with dislike of a world where people are mostly stuck in pretty awful lives followed by (in Liz Williams’ particular world) pretty awful afterlives, with not much of a way out. For me, any setting with this feature sets a fairly significant barrier in the way of reading enjoyment no matter how good other aspects of the book may be. This is probably why it took me years to read the second Inspector Chen book even though I liked the first.

Well, I didn’t realize that things would start moving in a better direction quite so promptly after the second book, but this is the book where the new management happens. I suppose mentioning that could count as a spoiler, but it’s clear the story is heading in that direction from pretty early on. In fact, a lot of the plot is predictable by the time you get halfway through it – say, about the time Zhu Irzh acquires his grandfather’s heart. Maybe earlier than that. This is fine! At least, it was fine for me, because of course the fun part is seeing how everyone gets to the ending. Plenty of twists along the way.

Also, in this story, so many minor characters have pretty satisfactory endings. I liked that. I was especially fond of Mrs Pa and her grandson. Here is one of my favorite tidbits:

The days had settled into a routine. Each morning, Mrs Pa and her new grandson walked down to the market. Everyone made a great fuss over Precious Dragon. Mrs Pa had been hard put to explain how, after being married for only a few days and being, in any case, dead, her daughter had somehow managed to produce a two-year-old child with the demeanor and vocabulary of an elderly gentleman, but people seemed to understand. It was pretty odd, but then so were a great many things.

I found this whole thing with Mrs Pa and her grandson completely charming, even though Williams is not the least bit subtle about Precious Dragon. You could say the author is hinting and foreshadowing stuff about this character, but it’s really more like dropping Heavy Clue Anvils on the reader. However, she must have done that on purpose because it would be impossible to view anything about Precious Dragon as subtle. I liked everything about Mrs Pa and her daughter Mai, though, and I enjoyed Precious Dragon very much.

Exactly why Mai (Mrs Pa’s daughter) ever got involved in this situation is totally not clear to me. I wonder if it gets explained in the 4th book? Right now it looks like one heckava coincidence that Mai winds up in the right spot to do this and that and take place in various events.

I liked Chen here, but he played a very minor role in the book and honestly did not need to be there. Zhu Irzh works well for me in this one, though; and we did see just a little of Inari for a change. But as far as I’m concerned, Mrs Pa stole the show for the book.

Well, regardless of Clue Anvils and mysterious coincidences, I liked this installment a lot, certainly better than the second book, and I’m will be going on to the 4th book quite soon. I’ve been ordering these as used hardcovers because I like the covers much better than the kindle editions; however, I see the fifth book is essentially unavailable except in kindle format. Oh, well. I am not such a stickler about sticking to a single format for a series as I used to be. At least all the books are available in one form or another.