Did you hear about this?

These diamonds are tiny, flawed, and may come from a long-lost planet

In 2008, a rock laced with tiny diamonds hurtled through miles of thickening nitrogen, oxygen, and carbon dioxide, its exterior heating up as it raced through the thick air. A telescope tracked its progress, watching as the asteroid-turned-meteor exploded. The violent burst 23 miles above the ground sent fragments speeding toward their resting place, dark against the sands of the Nubian desert in Sudan….

A new study published in Nature Communications today offers a dramatic origin story for the meteorite. Based on materials found inside the diamonds nestled within, researchers think this may be the remnant of a long-lost planet or planetary embryo; one that was still in its infancy when the chaos of the early solar system obliterated it.

In this case, the diamonds aren’t the most important part of this story. They’re just the heavy-duty packaging for much more precious cargo held inside. While a jeweler might see a bit of rock trapped inside a diamond as a flaw, to a geologist it is precious. Because of their strong crystal structure, diamonds can preserve minuscule bits of material that would otherwise disappear under the relentless changeability of the universe over time.

Neat, eh? Diamonds as packaging for the long haul. They think this particular rock was created as part of a “planetary embryo” early in the formation of the solar system, but was destroyed in a cataclysmic collision with other such embryos.

While on the subject of interesting rocks:

I saw this image of Rosetta’s comet on, I think, Twitter. Very eye catching! Do you see the tiny LA below the comet? Sure gives a great idea of the size of the comet! 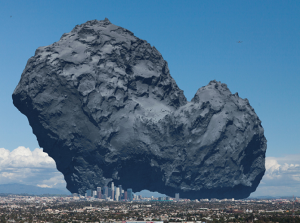 Googling around, I found this: The Many Faces of Rosetta’s Comet 67P

And this: Mission Complete Rosetta’s Journey Ends in Daring Descent to Comet.

“Daring” is a silly word considering the Rosetta spacecraft was obviously unmanned. I presume the controllers did not feel there was anything daring about dropping their spacecraft on the Rosetta comet. Nevertheless, very interesting!