So, I’m just getting caught up, more or less, with the Women in Fantasy posts at Fantasy Book Cafe, and I want to draw this one to your attention: An Incomplete Taxonomy of Fairies, with examples.

It caught my eye because anything combining “taxonomy” with fantasy tropes is just going to. Also, it sort of goes with the previous post, which tucked fairies into a natural history museum.

Mystical, mysterious and magnificent, everyone thinks they know fairies.

The word itself conjures up vivid images and subtle variations in spelling[1] can mean a world of difference. And so just as many (but not all) readers felt that there was something fundamentally un-vampire about sparkling in sunlight, any new incarnation of fairies needs one foot in the old…

Jeannette Ng covers Fairies as Other, Fairies as Just People, Fairies as Predators, Fairies as Abstractions, and Fairies as Mirrors. This categorization is interesting and perhaps useful and if you have a moment, you should click through and check it out. I particularly liked this footnote: “[1] I hazard to say that the rule of thumb is that the more e’s you have the more malevolent they are. So a “fairy” is a sparkly pixie of childhood whimsy and the more faux archaic spelling of “faerie” and “fey” are the dark adult creatures.”

“Fey” really is a vastly more adult looking word than “fairy,” isn’t it?

1. Most horrifying fairies ever: The Call by Peadar Ó Guilín. This is not a book I see referred to often enough. It’s horrifying but quite readable even for me, and I don’t have that high a tolerance for horror. By a startling coincidence, I see the sequel (The Invasion) just came out last month. I had forgotten to look for it. Well, good to be reminded; now it’s very much on my radar.

2. Most delightful moment with a predatory fairy: Remember in The Fall of Ile-Rien, when a Redcap or some other kind of predatory fairy finds Tremaine by herself? He says, “You look tasty, little girl.” And she levels a gun at his face and replies, “So do you.” Such a classic Tremaine moment. I may have laughed out loud.

3. Best fairy folk in an urban fantasy: Emma Bull’s War for the Oaks. Who out there didn’t fall in love with the Pouka?

4. Best fairy folk in a high fantasy: CJC’s Arafel’s Saga. CJ Cherryh defined the Fair Folk for me in this duology.

5. Favorite Tam Lin: Hard to say. I liked Roses and Rot by Kat Howard quite a bit, though I don’t seem to have reviewed it. I should re-read it and then review it.

7. Favorite fairy curse: So many. I don’t know. Marillier’s Daughter of the Forest? Maybe Merrie Haskell’s The Princess Curse? 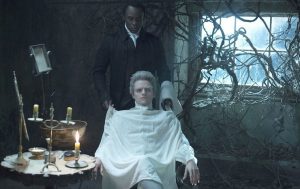 9. Best story that takes place mostly within fairy society, with human people just around the edges: Knife by RJ Anderson. This also counts for “favorite curse,” but it’s the fairies themselves who are cursed, not the humans. Lots of wonderful twists to standard tropes in this one.

I just tossed these off the top of my head, so I’m sure I’m forgetting half my own favorites. What’s your favorite fairy/fairie/fey from fantasy?

12 Comments → A taxonomy of fairies