It is a truth universally acknowledged that a reader who finishes reading Jane Austen’s Pride & Prejudice is in want of more to read. We already prepared one list of what to read when you want more Pride & Prejudice… and we still want more! What was married life like for Lizzie and Darcy? Whatever became of Mary and Kitty Bennett?….

Then we have a list of eight recent Pride and Prejudice “sequels.” Here is the one that actually sort of appeals to me:

LETTERS FROM PEMBERLEY: THE FIRST YEAR BY JANE DAWKINS
…Writing to her sister, Jane, Liz confides her uncertainty and anxieties, and describes the everyday of her new life. Her first year at Pemberley is sometimes bewildering, but Lizzy’s spirited sense of humor and satirical eye never desert her. Incorporating Jane Austen’s own words and characters from her other works, the book is a literary patchwork quilt piecing together the story of Lizzie’s first eventful year as Mrs. Darcy.

I wouldn’t have thought any of them would intrigue me at all, because in general I am not inclined to look up “sequels” to classics. For example, I love “Les Miserables” as a play, and after falling in love with it on the stage, I read the entire unabridged brick of a thing and actually enjoyed that too, even the looooong digressions about the sewers of Paris or whatever.

Then I found out about this: 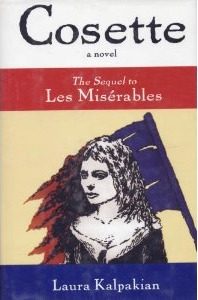 The tale of Cosette continues in this sweeping, exhilarating epic that interweaves its own galaxy of characters and narrative with real events and historical figures. So says Goodreads. I find the whole idea of this book somewhat repellant. I suppose the word I’m looking for is pretentious. I didn’t know anything about Laura Kalpakian, but my instant reaction was: Who does she think she is? And, yes, I have something of the same response to the idea of sequels to Pride and Prejudice.

I think I’m more interested in stories that try to capture some of Austen’s flavor without actually trying to be a sequel qua sequel. I don’t feel that Liz’s letters would be really hers, since Austen didn’t write them; and I don’t think I could set that feeling aside and enjoy them even if they’re well-written and totally in keeping with Austen’s character.

Maybe I’m being too close-minded, though. How do you all feel about “sequels” written by someone other than the original author?

16 thoughts on “Have you ever gone on to the “sequel” of a classic?”