Here’s a post by Ilana C. Myer at tor.com that seems in keeping with the recent McKinley emphasis here: Five Gorgeous Classic Retellings

Just five! I do feel anyone should be able to come up with ten. Shoot, anyone could manage “Ten Great Beauty and the Beast Retellings,” never mind ten total for all retold fairy tales and myths and so on. Nevertheless, it’s a a list I can get behind.

McKinley Beauty is on it, of course. That’s on practically every list of favorite retellings, and of course with good reason.

Ilana Myer also includes The Outlaws of Sherwood, which (I feel I should emphasize) I do like a lot; it’s my favorite version of Robin Hood just as McKinley’s Beauty is my favorite Beauty. I just feel the ending is weak.

Then Myer goes on to mention three others, one of which is a GREAT CHOICE that you don’t see mentioned nearly as often.

The Bloody Chamber by Angela Carter

The Once and Future King by T.H. White

The King Must Die by Mary Renault

Bluebeard is never going to be my favorite anything, because it’s fundamentally Gothic horror and my taste for that is limited. I did like Strands of Bronze and Gold quite a bit for its atmosphere, but I have no urge whatever to seek out Bluebeard retellings.

The Once and Future King is, perhaps oddly, both too silly and too tragic for my taste.

But The King Must Die! There’s a wonderful story. Mary Renault does such a lovely job with Theseus and the Ancient Greek setting. Plus she handles the tragedy in the way that works best for me: she cuts the story in half and puts the tragedy in the second half (The Bull from the Sea) where I can easily ignore it. 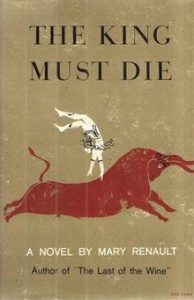 Here is what Myer says of The King Must Die:

This rendition of the myth of Theseus is powered by some of the most exquisite writing I’ve ever encountered. From the origins of Theseus in his home village of Troizen, to his intrigues in the royal palace of Athens, and—most of all—to the maze of the minotaur on Crete, Renault immerses the reader fully in a world that feels grander and more real than our own. This is the essence of epic: To make what is past, and strange to us, take on overpowering life.

Renault writes utterly convincingly of the Minoans, about whom we know so little; of bull dances, of the splendor of Minos’s palace, of Theseus’s adventure at the heart of the maze. She took an immortal myth and from it made a book deserving of similar immortality, because it is that good.

I’ve read The King Must Die multiple times; The Bull from the Sea just once. Both are beautiful, so whether you read the entire duology depends entirely on your tolerance for tragedy.