I was reminded of this post from Robin McKinley by the question raised in the previous post, about whether Spindle’s End or perhaps another McKinley novel ought to be included on a list of 50 Greatest Fantasy Novels of the Century (So Far).

Here, in a rare blog update, Robin McKinley reports some promising news in the guise of posing questions (and answering some of them).

ONE. Yes. I’m writing something. Its working title is ONE YEAR DIARY.

She does not promise to finish ONE YEAR DIARY any time this decade, so don’t hold your breath. Also, she says, “It’s a hell of a grim story. It’s not like anything I’ve written before.” Not sure how I feel about that. Sounds like if it ever does appear, I may be waiting to see the first reviews before buying it. Good to have the warning.

Evidently this is something McKinley has been writing in tiny fragments and posting in installments. As I say, I was unaware of this. There is a Goodreads page for it, here. There is no official description worth mentioning, but a commenter at Goodreads, Melody, helpfully posts this description:

The oddball heroine of this story is just recovering from the breakup of her 18 year marriage. Through a random twist of fate she ends up leaving the familiarity of the city she has lived in all her life for the unknown country to start her new life. Here she faces such sinister forces as whooshing pine trees, teeth gnashing crickets, and cows. But at least there are no cockroaches in the country. Right?

Luckily she is welcomed by a host of friendly, helpful, quirky characters who help her relocate to Cold Valley near New Iceland. Read her adventures as she aquires an oversized house, oversized vehicle and oversized pet. None of these compare to her gargantuan oversized imagination. But that’s good because she IS a fantasy writer.

Join Kes as she struggles with Yggdrasil in the backyard, Yog-Sothoth in the cellar, deinonychus under the porch and sinister men in black shadowing her. Of course those are all just a product of an overactive imagination. Aren’t they? Our heroine couldn’t be more out of place. Or perhaps she will finally find where she always belonged.

I guess it’s the crickets that are gnashing their teeth, not someone’s teeth gnashing the crickets? Thus we see why hyphens are useful; tooth-gnashing crickets would have made this clear. I wonder what the “oversized pet” is? Deinonychus, perhaps? That is a nice feathered dinosaur with the classic dromaeosaur giant claw on the hind food. A Deinonychus would count as an oversized pet since they weighed something on the general order of 200 lbs.

Anyway, as far as I can tell, KES is not available online in serial form any more, so hopefully it will indeed be published. When it comes to McKinley, I don’t count my books till they’re actually in my hands, Goodreads pages don’t count. When an actual cover image appears, I’ll take that as a good sign. She gives no information about when it should appear or from what publisher.

THREE — She says the second half of Pegasus will be published. I’ll believe that one when when it happens.

Now, while we’re on the subject of McKinley’s possible upcoming releases: What is your favorite McKinley story so far? Not just from this century, but ever. In case you can use a reminder, here’s a list:

Then a bunch of shorter work:

There are a few shorter works I’ve never read, but I do have most of the collected stories. Here’s how I would personally rank all these:

1. The Blue Sword. A perfect story. Just love it. Also, I recommend this one all the time as an example of the simplest, plainest, most invisible writing style — the kind of writing that just vanishes off the page, allowing the reader to fall directly into the story. 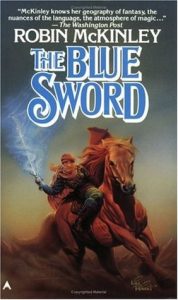 2. Sunshine. Another perfect story. I think it works beautifully from beginning to end.

3. Beauty. The first McKinley novel I ever read, it made a big impression on me and instantly became my pick for definitive Beauty retelling. In my opinion, the ending is weak. The ending of most Beauty retellings is weak. It is just hard to end this particular fairy tale well. Nevertheless, delightful story. Best retelling of any fairy tale ever.

Surely most McKinley fans will put these three at or near the top. After that the rest get harder to sort out.

5. “The Twelve Dancing Princesses.” One of my favorite fairy tales, beautifully re-told.

7. Deerskin. When I re-read this one, I skip that one bit toward the front. You know the part I mean. I read the very beginning and pick back up when she finds the cabin in the woods. But it’s a good, well-told story with a good ending.

8. The Hero and the Crown. Loved it, but not as much as The Blue Sword.

9. Dragonhaven. I know it’s slow. I really liked it and thought McKinley did a fine job with the voice of the protagonist.

11. Outlaws of Sherwood. I like Robin Hood and I enjoyed this book very much, but I think it’s impossible to end this story well and I don’t think McKinley managed to do it any more than anyone else.

12. “First Flight.” Too repetitious, imo, and too predictable. Still a great pleasure to read.

14. Shadows. I liked it a lot, but it felt unfinished.

14. “Hellhound.” I liked it a lot, but (a) I didn’t believe in the magical cure for what happened to the brother; and (b) the ending, where Miri and the others explained what had happened, felt repetitious and unnecessary.

15. Spindle’s End. The ending was totally unsatisfactory imo, so much so as to nearly spoil the book, which I otherwise liked a lot.

16. Rose Daughter. I think I resent this title on behalf of Beauty, which may not be fair, but there it is.

18. The rest: I haven’t read them or they didn’t leave that much of an impression.

Feel free to argue! Which do you think I put in completely the wrong place?