First, a report on the strategy of choosing books at random from the TBR shelves:

I have never, NEVER been less interested in a book for the first quarter, and then wound up liking it quite a bit. I have NEVER decided I was uninterested in the characters, unthrilled by the plot, and done done done with a book and then flipped ahead a bit and suddenly gotten much more interested.

On the other hand, did any of you possibly have a similar experience with The Demon and the City? Or with another book in Liz Williams’ Inspector Chen series? 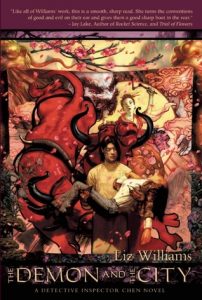 This is the second book of the series. The official description is lacking, so here is a much better description and review, of which I’ll pull out this part because this reader’s experience was similar to mine:

Detective Chen Wei goes on vacation for a couple of weeks and the whole city of Singapore Three goes to Hell. … chaos and conspiracy (and hilarity) ensue when Chen returns from vacation to find Singapore Three in a state of upheaval, so close to the Day of the Dead, when the barriers between the worlds grow thin. He and Zhu Irzh [his demon partner] work frantically to unravel this mess with barely enough time to capture the sinister force and save the city. … their chemistry/partnership breathes life back into the story….That’s what the first half of this book is missing, this strange yet familiar connection between Chen and Zhu Irzh that started in the first book. … That’s not to say the events prior to Chen’s return are boring; it’s just different like an unexpected break from narrative. An investigation and near-apocalypse without Chen’s involvement seem out of balance somehow, as he is the element that ties everything together. When he returns, the investigation is steered back on track and the story has a sense of direction again.

I don’t know that Inspector Chen is my favorite! character! ever! But until he turned up about a third of the way through the book, I couldn’t get interested. I didn’t like Deveth, the first pov character who was introduced (of course, murder mystery here, she didn’t last long. She reappeared in a different form, though, because Singapore Three is like that.) I didn’t like the second pov character, Robin. I didn’t care for Zhu Irzh, I didn’t like the villain, and I truly was not interested in the fate of the world.

Then I hit this scene where it looked like Robin was also going to die and I was like, Don’t care, I’m done. But I did flip ahead a bit just to give the book one more chance and two things happened: Chen turned up and, sure enough, breathed life back into the story. And it turned out Robin hadn’t been killed after all. So I skipped back a bit, to where Chen reappeared, and read the rest of the book from there.

And you know what? I liked it quite a bit. Zhu Irzh works so much better as a character when Chen is present.

The demon had bridled. “I’m not unremittingly evil—and me saying that just goes to show that I’m not a typical demon. I have feelings, too. I have a conscience. I helped you save the world, didn’t I?”

Chen, though conceding that there was a measure of truth in this, had remained resolute. “I don’t think you’re unremittingly evil,” he said. “I just think you’re . . .slightly dodgy.”

I don’t know, I think Zhu Irzh is closer to unremittingly evil than merely dodgy. I sort of like him, but maybe his evilness is why I needed Chen in the story. Robin is such an idiot at the beginning. She is at least trying to be a better person by the middle. Jhai, the villain, is SO EVIL. Even she is not so awful by the end, if only because she’s suffered, um, some personal reverses.

Other features that make this series iffy for me:

1) Singapore Three is very nearly too gritty for me. It’s a great setting, don’t get me wrong, but I would prefer knowing less about its filth and poverty and the hopelessness of so many people … I think it’s also hitting my claustrophobic-setting button because so many people seem trapped in lives of quiet desperation and I just hate that.

2) Are we ever going to actually meet Chen’s wife? I know she’s a demon, but we know almost nothing about her and she never seems to be actually featured. How in the world did Chen come to marry a demon? I don’t think we actually found out much about this in the first book (Snake Agent) and we never see Inari in this book.

3) Both Heaven and Hell are so unappealing, and the Night Harbor, yuck. It seems that in this world, most people first live lives of quiet desperation and then endure afterlives that may be worse.

Given that all afterlives appear to be real for their various adherents, I’m amazed everyone in Singapore Three doesn’t convert en masse to Christianity. How does that even work? — I mean all religions and afterlives being true? I would really like to have Chen or Zhu Irzh meet a Christian so that Williams would tackle that question.

Features that mean I may go on to the third book:

1) The setting is so ornate and interesting.

2) I do like Inspector Chen and I guess Zhu Irzh as well, at least under the right circumstances.

3) Williams’ writing is very good. I bet she gets told she’s writing very “intellectual” books and that she would do better to write more “emotional” books, because I get told that and my books are not nearly as intellectual as hers.

Who should try this series:

1) If you like urban settings, you should definitely try Singapore Three. Especially if you also like non-European settings.

2) If you like both detective novels and fantasy, you may well appreciate Inspector Chen.

2 thoughts on “Recent Reading: <em>The Demon and the City</em> by Liz Williams”