Here’s a post by Aliette de Bodard at tor.com: Five of the Creepiest Monsters in Fantasy Fiction

By an amazing chance, I’ve actually read every one of her five picks. That doesn’t happen very often when checking out these top-five and top-ten lists.

These are good choices, though I could go back and forth about several. Stiletto wasps, sure, but bugs like that (and worse) are pretty common in SFF, yes? At least, it seems to me Swarming Bugs That Sting are everywhere. Granted, Scott Lynch is a great writer who evokes the horror of that kind of swarm pretty effectively.

The Hunter from The Book of Atrix Wolfe … I felt so sorry for everyone caught up in this spell-gone-awry after I understood what had happened, so I can’t remember now whether I found the Hunter especially creepy the first time I read the story.

Let me see, creepiest monsters in SFF … not like there’s a shortage, really … but I find myself inclined to pick a handful who strike me as psychologically creepy rather than biologically icky. That would include, oh —

1) Cersei in Game of Thrones. Her special brand of narcissistic paranoia makes her worse to read about even than Jamie. And that’s saying something.

2) O’Brien, from George Orwell’s 1984. There’s a reason I hate adult dystopias and the victory of evil is it. O’Brien personalizes that kind of victory.

3) The Master of the Wild Hunt in Kate Elliot’s Spiritwalker trilogy. His inhuman detachment and casual cruelty are totally creepy. In contrast, we also see, in the same trilogy, James Drake, who is just an appalling person the reader comes to loathe, but not creepy. So this trilogy is great for distinguishing between creepy monster villains and bad guys who are really bad, but not in such a disturbing way.

4) The Gentleman with the Thistledown Hair in Jonathon Strange and Mr. Norril. His complete lack of empathy is quite terrifying.

5) And, you know, while we’re on the subject of villains who completely lack empathy, Lilianne from The City in the Lake. She’s not fae, and she is certainly more ambitious than the Gentleman with Thistledown Hair, but she is similarly lacking in the slightest understanding of and compassion for ordinary people. 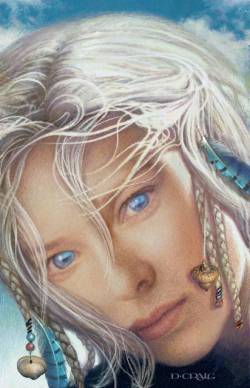 3 thoughts on “Five of the creepiest monsters in SFF”