Now, I grant you, “house” is a strong term for a teensy little structure that is even smaller than my house, which is pretty small. Here’s a picture: 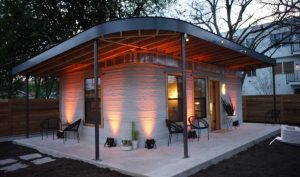 And here’s a description:

The production version of the printer will have the ability to print a single story, 600-800 square foot home in under 24 hours for less than $4,000. As a part of this effort, ICON has developed cutting-edge materials tested to the most recognized standards of safety, comfort and resiliency and is designed to function with nearly zero waste production methods and work under unpredictable constraints (limited water, power, and labor infrastructure) to tackle housing shortages.

Austerity sounds virtuous. And for some people, it is the thing that motivates them, it is a part of who they are. For the rest of us, not so much. Fad diets often ask you to sacrifice things to which you’ve grown accustomed — and often things your body actually needs — under the auspices of getting healthy. …

Tiny house living will be like this. It’s good for some. Single people in particular — I mean, hey, they do it in New York (usually because they have to, though, not because they want to). But for the rest of us, while we may find some value in paring down and cutting the wheat from the chaff, a tiny house may be a bridge too far. No, we don’t need to live in 3,000 square feet, but we also don’t need to live in an airless, soul-crushing box. Many of us will find joy in having a little leg room when we’re sitting on a toilet, or having a place to put our stuff, or having a table at which we dine instead of standing around holding plates and staring at each other. Many of us like having separate rooms instead of BATHROOM-KITCHENS. It isn’t that romantic having a refrigerator that’s also a toilet, or a bed that’s also a bathtub.

I suppose there’s no intrinsic reason one couldn’t build a bigger (though still single-story) house as repeated modules.

Big or small, though, printing a house, wow. Three-D printing is definitely science-fictiony and getting more so all the time.