From Stubby the Rocket at tor.com: Our Favorite Sequels That Are As Good As the First Book

Great idea for a post! Let’s see which second books are pulled out for this list — gosh, only four! That’s a short list. Here they are:

The Restaurant at the End of the Universe by Douglas Adams

A Wind in the Door by Madeleine L’Engle

I’ve read all of those except the one by Hartman. I think I agree that none of them are letdowns from their respective first books. Click through and read the comments to see why each one was chosen for that list.

Now, let’s expand the list because surely there are plenty more sequels that don’t disappoint. For the purposes of this list, I believe I will leave out of consideration various UF series that really take off at Book 3 or later. Let’s stick just to second books.

Oh, and also in the category of things-that-don’t-count, single really long novels that have been broken in half for publication purposes. So things like Black Out / All Clear by Connie Willis don’t count. The second book has to be an actual sequel.

5. The entire Demon’s Lexicon series by Sarah Rees Brennan, including the second book, The Demon’s Covenant, was solid. This is one of those trilogies where every book has a different protagonist. I liked Mae quite a bit as she took the central role in this second book.

6. Doris Egan’s Ivory series is great and I’ve always been sorry she didn’t go on with the series. The second book, Two-Bit Heroes, puts Theodora and Ran into quite a tense situation. The ending is just priceless.

7. Gemina, by Kaufman and Kristoff, was just as good at Illuminae. Same rip-roaring pace, same weird typographic effects, same crazy plotting, different protagonists but tied into the first book; I just can’t wait for Obsidio, which is coming out later this month, I think.

9. Not books, but I can’t leave this list without mentioning “Terminator II” and “Aliens,” both of which were SO GOOD and much better than their respective first movies.

10. And one more: Land of Burning Sands, the second Griffin Mage book. This is my personal favorite of the trilogy, so as far as I’m concerned, it certainly is not a letdown from the first. It’s one of the sequels where the protagonists are different even though the plot hooks together with the first book. That is a technique that doesn’t work for all readers, but obviously I like it. I remember how much trouble I had starting it — I kept thinking of YA characters and plots — until I finally said, “FINE, the protagonist is 42 years old, let’s move on from there.” That knocked me out of YA mode at last. 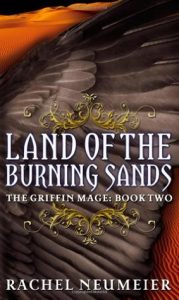