Macsbrains posted this link in a comment to the silent-letters-in-English post: More than anyone ever needed to know about the kanji for phosphorus

It is a delightful post even if you start off knowing nothing whatsoever about Japanese kanji, which was my starting point. Here is part of the post: 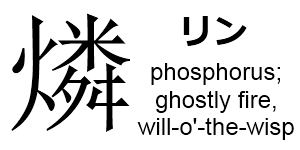 When Japan decided it needed a kanji for the element phosphorus, it just repurposed 燐, which originally referred to any sort of mysterious ghost light–foxfire, will-o’-the-wisps etc. You can remember 燐 because the left half is the fire radical 火 and the right half is clearly the same phonetic element used in 隣 (リン、となり neighboring). That right half is made up of 米 (uncooked rice) and 舛 (a picture of two feet pointing different ways, like the bottom half of the kanji 舞 “dance”).

No but seriously why is there rice in there?

My kanji dictionary tells me it wasn’t always rice. It started out as 炎 (flames) and got simplified weird….

Somewhere along the line someone was like WTF I DON’T HAVE ROOM TO WRITE ALL THIS FIRE and wrote 米 instead. Then someone else was like WTF WHY DOESN’T THIS HAVE THE FIRE RADICAL and stuck more fire on there.

… And although I don’t know anything about Japanese kanji (a tiny bit more than I did before reading this post, though!) I love this historical oddity of a kanji starting off with the brush strokes for fire, being simplified so that it looked like rice, and then later someone saying “Why rice? Don’t we need fire? and putting fire back in so now the kanji includes both rice and fire…

This reminds me a bit of this moment in Steven Brust’s The Phoenix Guards series:

What followed was ten years of almost constant war between the Dragonlords of the Empire and the Easterners, during which the Easterners occupied the area and fought from the surrounding mountains. The Serioli, who departed the area to avoid any of the unfortunate incidents that war can produce, left only their name for the place, which was “Ben,” meaning “ford” in their language. The Easterners called the place “Ben Ford,” or, in the Eastern tongue, “Ben gazlo.”

After ten years of fierce battle, the Imperial Army won a great victory on the spot, driving the Easterners well back into the mountains. The Dragonlords who had found the place, then, began calling it “Bengazlo Ford.” The Dragons, wishing to waste as little time on speech as possible, shortened this to Benglo Ford, or in the tongue of the Dragon, which was still in use at the time, “Benglo ara.” Eventually, over the course of the millennia, the tongue of the Dragon fell out of use, and the Northwestern language gained preeminence, which rendered the location Bengloara Ford, which was eventually shortened to Bengloarafurd. The river crossing became the Bengloarafurd Ford, which name it held until after the Interregnum when the river was dredged and the Bengloarafurd Bridge was built. Should anyone be interested in finding this delightful city, it still stands, but the city was renamed Troe after the engineer who built the bridge, either because the citizens were proud of their new landmark, or because the engineer’s name was short.

Which is surely more extreme than anything in the real world (probably? Maybe?), but is deeply amusing. To me this seems reminiscent of the thing with fire-rice-fire in the Japanese kanji described above.

Language is a wonderful thing.

10 thoughts on “Worldbuilding with language”