From Kill Zone Blog: How Should a Character Say Nothing?

Reacher said nothing has become a Lee Child signature. …I’m sure he puts it in with a bit of a wink and a smile.

In fact, the phrase is now so familiar that the recent book by Andy Martin chronicling Lee’s writing of Make Me is titled Reacher Said Nothing. In the book Lee explains that Reacher “often says nothing. He shouldn’t have to be wisecracking all the time. He’s not into witty repartee. He’s supposed to do things.”

Nothing wrong with that. And though I personally love witty repartee, there are times when a character should stay silent.

How do we do that effectively? X said nothing is an option. I’ve certainly used it myself. But lately I’ve begun to consider other ways.

This is a pretty good post about how to handle a character who is in fact not saying anything.

James Scott Bell identifies four methods for handling silence, all of which are good, effective techniques. I use them all, but I’ve never thought about them before. Here they are:

There’s nothing wrong with “X said nothing.” Sometimes that’s exactly what you want to use.

2) The action beat — The character can do something rather than say something. Bell cites Hemingway’s exchange in “Soldier’s Home,” where the mother says, “I pray for you all day long, Harold.” Then Harold looks at the bacon fat hardening on his plate.

3) The thought beat — The character can think something rather than say anything out loud. Here Bell uses the example of a direct thought set into the text in italics –as in one character saying accusingly “You mean to stand there and look me in the eye and pretend you don’t know what I’m talking about?” and the second character thinking Uh oh. He knows.

I don’t usually find myself doing this, though I’m sure I have used a direct italicized thought occasionally. I think this can sound artificial or weird somehow, though I’m equally sure some authors make it sound perfectly natural and smooth. Lois McMaster Bujold drops an occasional single silent word into dialogue, usually or always when a point-of-view character is trying to think of a different word. The sort of situation where someone might say something like, “I’ve just been admiring the –” depraved — “sophisticated decorating choices you’ve made for this room.” She does a great job with those little asides.

4) The perception beat — The character notices something rather than saying anything. Bell uses this example:

“You mean to stand there and look me in the eye and pretend you don’t know what I’m talking about?”

Bill looked at the scuff marks on the floor.

I don’t know. This looks a lot like the action beat. Not sure I think it’s very distinctive. Can perception be used without having your protagonist look at anything? Let’s see:

“You mean to stand there and look me in the eye and pretend you don’t know what I’m talking about?”

Now, this all makes me think of Deb Coates’ Wide Open series, where Hallie’s father is basically inarticulate and Coates builds his character with his silence, which is at least as demanding as building a character through witty repartee. He is actually one of my favorite secondary character in the series. 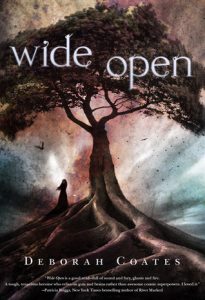 This is a bit different from handling moments of silence from the protagonist, but it’s another component of handling a character who isn’t saying anything.

1 thought on “Saying nothing”