Okay, yes, I’ve already read Emergence by CJC. It’s not even March, yet that seems so long ago already!

Also The Infernal Battalions by Wexler, which finishes the Shadow Campaigns series and I will write a review any day now, probably. It took me a long time to read the whole five-book series. Very dense, plus I stalled out for a bit during the last book for no clear reason. Plus I was working on stuff of my own and that slowed me down a lot.

But the year is young, and there are still so many books coming up in 2018! And so many that are sequels, or that for some other reason I already know I want to read. Here are ten that are pinging my radar particularly loudly:

1. Burn Bright by Patricia Briggs. It’s coming out in just a few days, but I probably won’t leap to buy it immediately. These much-anticipated releases are often so pricey at first. I’ll buy it when the price comes down or when I suddenly really want to read it right that moment, whichever comes first.

2. Obsidio by Kaufman and Kristoff, also coming out in March. Ooh, very exciting! What a page-turner of a series this is! Such wild use of fonts and other formatting techniques! Tons of fun. Really looking forward to it.

3. “Artificial Condition” by Martha Wells, the second Murderbot novella. Loved the first one, already read it a couple times, definitely see no reason whatsoever I won’t love this one just as much. It’s coming out in May.

4. Privilege of Peace by Tanya Huff, due out in June. It’s the last installment (I think?) of her Valor series. I can’t wait to see how she winds the series up.

5. Spinning Silver by Naomi Novik, due out in July. 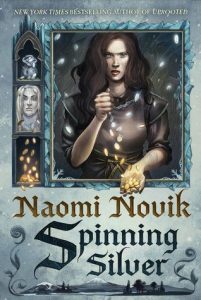 It looks like a companion to Uprooted. That’s one I loved more the first time I read it than I did the second time. Still, I’m very interested to see where this next book goes. It looks like it draws on Rumpelstiltskin — that’s certainly a new one in the family of fairy tale retellings. One doesn’t often see a moneylender as the protagonist:

Miryem is the daughter and granddaughter of moneylenders… but her father isn’t a very good one. Free to lend and reluctant to collect, he has loaned out most of his wife’s dowry and left the family on the edge of poverty–until Miryem steps in. Hardening her heart against her fellow villagers’ pleas, she sets out to collect what is owed–and finds herself more than up to the task. When her grandfather loans her a pouch of silver pennies, she brings it back full of gold.

But having the reputation of being able to change silver to gold can be more trouble than it’s worth–especially when her fate becomes tangled with the cold creatures that haunt the wood, and whose king has learned of her reputation and wants to exploit it for reasons Miryem cannot understand.

6. Record of a Spaceborn Few by Becky Chambers. A standalone companion to The Long Way to a Small, Angry Planet. I very much enjoyed the other two titles in this loosely connected series. Looking forward to this one. It’s expected to come out in July.

7. Magic Triumphs by Ilona Andrews. The last book of the Kate Daniels series! I bet it’s great. It’s expected out in August. I think they have a related novel coming out before this one — featuring a bad guy — and although generally am not at all keen on bad-guy pov, I suppose I will at least look warily at that one. I do like redemption plots, so if that’s what this is, good.

8. Thief of Emberlain by Scott Lynch. It’s due out this fall. These are dense, gritty novels, but I’ve been really happy with each one, especially the most recent, Republic of Thieves.

9. Muse of Nightmares by Laini Taylor. Provided I’ve read Strange the Dreamer by then and really liked it, I’ll no doubt be waiting for this one. It’s due out at the end of the year, which is good, as that makes it more likely I will indeed read the first book.

10. I can’t stop at nine, right? So, though I don’t know what it’ll be called or when it’ll be released, I’ll add: Whatever romance Laura Florand brings out next, I’ll be snapping it up.

If I haven’t mentioned one or more titles you’re especially interested in for the coming year, drop it in the comments, please! I’d hate to miss out on something that I haven’t realized is coming out this year.