From Atlas Obscura, this: Putting ancient recipes on the plate

Each morning, Monaco picked her way across the site early, before it was beset by throngs of tourists. These walks, she says, stoked her imagination. She wondered about daily routines from 2,000 years ago, when the volcano was of little immediate concern and bakers and cooks fussed to fortify the busy city. What smells drifted from ovens in the morning? How did lunch taste? In pursuit of answers, Monaco decided to recreate a panis quadratus and bring the past into her kitchen.

This is just fascinating!

As you can imagine, trying to re-create ancient foods can present some significant challenges:

[A] general problem with reconstructing ancient cuisine is that specifics are hard to come by. For one thing, the written record is spotty. For many places and periods in the ancient world, Bottéro writes, “we can easily find out what they ate, but not how they prepared or enjoyed it.” … Even when ancient recipes have survived, their instructions can be maddeningly vague. The ingredients may evade easy translation or prove difficult to source. Among the oldest surviving recipes are three clay tablets housed in the Yale Peabody Museum of Natural History, from the Old Babylonian period, around 1700 B.C. Even translated from ancient Akkadian to English, they remain puzzling. The tablets’ age, fragile medium, and “long sleep underground” have erased some of the specifics, Bottéro writes. Other seemingly crucial fine points were omitted from the beginning. “There is still an element of interpretation, because [the tablets] don’t mention amounts, time, or other details that seem to have been taken for granted,” says Agnete Wisti Lassen, associate curator of the Yale Babylonian Collection.

One recipe, for a clear broth, reads like this, with brackets indicating illegible words and question marks denoting reasoned guesses: “Meat is used. Prepare water; add fat [ ], milk (?), cypress (?) as desired, and mashed leek and garlic. It is ready to serve.”

I guess our best modern approximation is those parish cookbooks, the ones that say “a can of crushed tomatoes” without specifying how big a can. Or your grandmother’s old recipes, recorded perhaps by someone who never used standardized measurements and that might assume you know how the dough should look and feel. Only even more vague than that!

To my considerable disappointment, there are no recipes offered at the link. However, I googled panis quadratus recipes and thus quickly found a take on the bread of Pompeii, here. 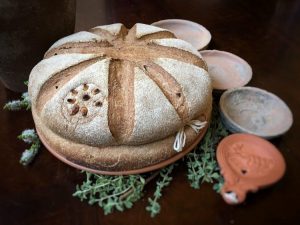 As you see, it is slashed into eight segments and has a deep horizontal indentation around the middle. Quite a handsome loaf.

The Baking Bread with the Romans post these ingredients in their recipe:

Spelt is an old variety of wheat. These days it’s not hard to find at health food stores, and I bet Amazon has it. I have some because it’s carried by Global Foods, which I visit a couple times of year.

I would expect a loaf that’s on the heavy, dense side, but there’s nothing wrong with that. The starter would contribute flavor. I’m not very used to working with starters, but it’s tempting to follow this Roman recipe and give it a try.

1 thought on “Bringing the past to life, with cooking”