Wow, was this past Sunday a big cooking day for me. I mean, among other things. I worked on my WIP in the morning, then made this interesting filled shortbread, then took some of the dogs to the park, then made khachapuri breads. There was no particular reason to make a lot of wonderful, interesting treats this weekend; it just worked out that way.

Both these recipes were good and impressive and rather easy, so let me share them with you in case you have a particular reason to want to bake specialty breads (or no actual reason, but you just want to).

This recipe is from this blog post, which I found because I googled “recipes using lemon curd.” Every so often my mother’s Meyer lemon tree ripens a fruit despite suffering from a terrible sunlight deficiency during the winter, and so I make Meyer lemon curd and then look around for stuff to do with it. Aside from just layering the lemon curd with whipped cream in little glass dishes, which by the way is hard to beat, but the following recipe only uses ½ C of lemon curd, so there was plenty for both uses.

I found the lemon actually rather subtle in this recipe, so I may try it again with raspberry jam, an alternative suggested by the original post. It was quite easy and the shortbread practically melts in your mouth, so it’s definitely worth making again.

Here’s what you need —

Cream the butter, sugar, and salt. Add the flour. You can of course use cake flour, which will make the shortbread more tender and crumbly. I have to say, it was PLENTY tender and crumbly even using all-purpose flour, so my official position on this issue is: Do not make a special trip to the store for cake flour.

Whatever kind of flour you use, divide the dough into two portions. You can chill or freeze the dough at this point, but I went straight on.

Roll one portion of the dough out to a 12” round . . . mine was more like 10”. The original recipe says to roll it out and then transfer it to parchment paper and I was like, why would you make life hard for yourself? So I rolled it out actually ON the parchment paper. My widest baking sheet is just about 11”, so that’s how wide I rolled out the circle of dough. Yes, this is a very tender, soft dough. Just be gentle and use a tiny bit of extra flour on the top surface so the rolling pin doesn’t rip it up too much. It wasn’t that hard to roll out.

The way you keep the parchment paper from sliding all over the countertop while you roll out the dough, by the way, is to overlap the paper a bit over the edge of the counter and lean your body against the paper to pin it in place. It’s quite simple, a lot simpler, probably, than trying to transfer a delicate round of dough to parchment after you roll it out.

Move that round out of the way and roll out the second portion of dough to match, on a second piece of parchment paper.

Spread the lemon curd over one round of dough, leaving about ½ inch border. Use the parchment paper to lift the second round and invert it over the first. I realize this step has some potential for catastrophe, but in fact the dough stuck to the paper just well enough to make it pretty easy to line up the circles as I inverted the top one. The paper then cooperatively peeled off, so I definitely recommend this method.

Now, trim the edges to make a reasonably smooth circle – I was not obsessive about this – and crimp the border all around with a fork. Prick the top all over. Here’s where you could brush the round with a beaten egg and sprinkle it with sugar, but I forgot. I just dusted the whole thing with powdered sugar after it was out of the over and that worked fine as a finishing touch.

Bake at 350 degrees for 25 minutes or until lightly golden.

Incidentally, you can throw away the trimmed scraps of dough, but you can also make four or so thumbprint cookies and fill them with lemon curd. They got overbaked when I did this, so maybe put them on a separate sheet and bake for, I don’t know, 18 minutes maybe.

Cool before cutting into wedges and serving. Really tasty, especially if you don’t cool the shortbread quite all the way to room temp so that you get to eat a wedge while it’s still a little bit warm. I’m embarrassed to tell you how many pieces I ate in one day, but I will just mention I’m giving the rest to my mother, who loves shortbread and unlike me actually needs to gain weight.

So that was treat number one, and very pleasing it was! 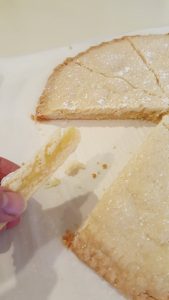 Okay, later in the day I made these spinach khachapuri. After Christmas I always get myself a few cookbooks as for some reason everyone else seems to feel I have enough. Anyway, this year I picked up Samarkand, by Eden and Ford, and needed to use up some spinach, so I made these khachapuri boats. For the third time. They’re really good! I have never made them quite according to the recipe, but every variation I’m made has been great.

1¼ C bread flour – I have been using a high-protein white whole wheat flour
1 tsp yeast
½ tsp salt
¼ tsp sugar – the recipe says superfine, but honestly, it’s just ¼ tsp, so what difference can it possibly make?
1/3 C plain yogurt – I used full-fat Greek yogurt, which I generally have on hand.
2 Tbsp warm water – I used at least 6 by the time I was done, possibly because Greek yogurt doesn’t have as much water in it as regular.

2½ C chopped spinach leaves. I have used fresh (which I zapped briefly in the microwave to cook just a little) and frozen (which I squeezed out) and I will say that I used too much spinach when I used frozen because I wasn’t sure how to much would equal 2½ C chopped fresh. Maybe more like 1 C frozen. Use your own judgment.

1 C grated mozzarella
½ C feta, crumbled
¼ C ricotta. I happen to dislike ricotta, so I used a pretty generous amount of cream cheese, which I like much better.
2 scallions, chopped
1 Tbsp minced parsley. I didn’t have any, so I left it out.
I Tbsp minced cilantro. Ditto.
1 tsp minced dill. I used dried.
3 eggs
Salt and pepper to taste

Make the bread dough. I used my stand mixer. Let rise two hours, it says. I let it rise a little less than one hour in a warm oven.

Combine the filling ingredients through the herbs. You can add one egg to the filling, but somehow I just never seem to. I think I didn’t have enough eggs the first time I made this and it worked fine without. Probably adding the egg would make the filling lighter and puffier. I should actually add it next time and see.

Divide the dough in half. Or thirds. Or fourths. I favor making these smaller, though the original recipe just makes two bigger khachapuri. I find even three a bit on the big side and will probably make four next time. 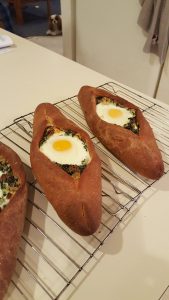 Preheat the oven to 475 degrees and put a pizza stone in the oven to get really hot. Slide the khachapuri onto the hot stone. Or use a plain baking sheet. Either way, bake for 10 minutes. Take out of the oven, push the filling aside in the middle of the boats, and break in an egg. Return to the oven for 5 minutes or until the egg is just set.

Now, I have had trouble getting the eggs to set. I don’t mind a liquidy yolk, but a liquidy white – ugh. So twice I have put the khachapuri under the broiler for a minute to finish the eggs. This time I just let them bake a little longer. Either way, the bread gets really brown, so what I actually suggest is, bake for just 6-7 minutes first, then break the eggs into the middle, then bake another 7 minutes or so, until the eggs are set to your taste.

Cool enough so you won’t burn your mouth and there you go. The original recipe says “Serve with a slice of cool butter on top” which you can certainly try if that appeals to you, but it seems completely unnecessary to me. Definitely an excellent brunch idea if you’re having company.