Scientists on Monday announced the discovery of a crow-sized, bird-like dinosaur with colorful feathers from northeastern China that lived 161 million years ago during the Jurassic Period.

They named it Caihong, the Mandarin word for rainbow. Microscopic structures in the exquisitely preserved, nearly complete fossil unearthed in Hebei Province indicated that it boasted iridescent feathers, particularly on its head, neck and chest, with colors that shimmered and shifted in the light, like those of hummingbirds…

Look, I get that most mammals don’t see color all that well, and thus mammals are by and large rather boringly colored. But this is because mammals are descended from nocturnal ancestors that had secondarily lost color vision, not because color vision is unusual. We are use to thinking (I guess?) that humans are special because of our pretty decent color vision. But practically all vertebrates see lots of colors just fine.

Lizards can see colors, many of them better than humans.

Fish can see plenty of colors, including some we can’t.

And you know what fish, lizards, and birds all have in common? Yes, they are often VERY COLORFUL. 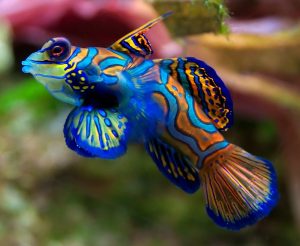 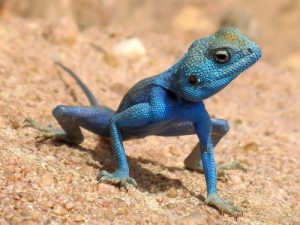 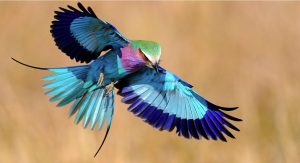 Of course the default assumption should be that dinosaurs could see color. Why wouldn’t they? That’s true of most vertebrates. Camouflage is all very well and good, but display is also fundamental and very often the need for display completely overwhelms the need to stay out of sight — peacock’s tails come to mind here.

All those drab reconstructions of dinosaurs were always implausible, and obviously so. 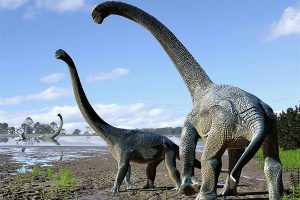 Even when authors and artists try to do better, they keep getting hung up on the idea that Big Animals Should Look Like Mammals, and thus be boringly colored.

This one is better, but still shows a limited palette.

While no doubt many dinosaurs, like many of today’s birds, WERE drab, there were surely plenty that were VERY BRIGHTLY COLORED. If I were an artist and called upon to envision realistic dinosaurs, while I’d pattern and color some like, oh, killdeer (I have always been very fond of killdeer), I would also base many colors and patterns on tanagers, trogons, hummingbirds, rollers, parrots, pheasants, kingfishers, and so on and so forth.

5 Comments → Not sure why anyone is surprised: Colorful dinosaurs