My mother recently wanted to go buy a whole lot of very cheap books at the perpetual library sale at the Park Hills Library, an admirable method used by that library to keep less popular books in circulation. You’d think no one in our family received books as gifts for Christmas, which I assure you is not true. I think my mother feels more comfortable if she has fifty books or more on her TBR stacks, which I’m sure we can all understand.

Naturally I went along, thus increasing my already tottering TBR pile by five or so titles. Except this quickly expanded to ten because one of the books I picked up was the second book of Beverly Conner’s mystery series featuring archeologist and forensic anthropologist Lindsay Chamberlain. I liked it a lot and now I’m rapidly reading through the entire five-book series. So far I’ve read three: Rumor of Bones, Questionable Remains, and Dressed to Kill. 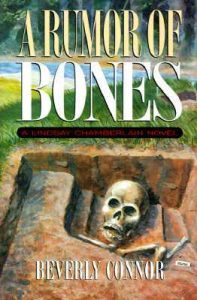 So far I haven’t figured out the actual mystery in any detail for any of the books, which is a nice perk, although I don’t actually read mysteries for the mystery. I read them for character and setting, but I do like them better if I am also baffled by the mystery or surprised by the plot. In these, I definitely appreciate Lindsay Chamberlain as the protagonist. The archeology and forensic anthropology are both so interesting:

Lindsay took the brush and dusted the skull. It had been partially flattened from years of decay, heavy topsoil, and, Lindsay supposed, from farm equipment running over it, but certain features caught her eye. First, the very narrow nasal passage, then the slightly rectangular eye sockets: telltale signs of a Caucasian skull. She looked closely at the teeth, which she believed had an overbite instead of the usual even-edged occlusion of people of Asian ancestry. Lindsay touched the zygomatic arch with her finger. She would have to wait until the skull was out of the ground, but she was relatively sure that these were not the forward-projecting cheekbones of an Indian skull, but the more recessed ones of a European.

It’s all very interesting! And not dry in the least, at least not for me, because all these details are woven together with Lindsay’s personal reactions and with human-level stories of the dead, what they were feeling and thinking, what their lives involved. I grant you, if you are not somewhat interested in archeology or forensics or both, your mileage might vary.

Other notable features of this series:

1) Lindsay herself is a good protagonist. She is curious, determined, highly competent, kind and yet capable of emotional detachment; also strongly inclined to imagine the lives (and deaths) of the people she encounters. Thus she gets involved despite herself. She’s very good at spotting connections between things, so people come to her for help sorting things out. There’s no feeling that she is trying to involve herself in things she ought to stay out of; it’s more that even though she’s trying to stay out of things, her desire to help the people who come to her plus her own curiosity won’t let her. It’s all pretty believable, despite the occasional odd coincidence required to keep Lindsay at the center of events. Less believable are the slightly too frequent moments when she goes off by herself, nobody knows where she is, and she gets assaulted or falls down a well or whatever. This might not be as noticeable if I weren’t zipping through the series so fast.

I will add that Lindsay is startlingly good at a number of things not related to her profession. For example, she’s a professional-level dancer. This is okay with me, but only just barely. It seems a bit much. In the same way, I do wish her mother hadn’t given her a stallion as a gift. I don’t really think casual riders ought to own stallions and I have a hard time believing a real expert would give her daughter one. It feels to me like a detail added by a romantically inclined author who doesn’t really know that much about horses. I could be wrong, obviously. Maybe lots of Arabian stallions are actually easy to own and train.

2) The secondary characters are fairly well drawn, though most have a fairly small role. I’m finding this off-and-on thing with her sometime-boyfriend / sometime-dancing partner / sometime colleague Derrick a bit off-putting. I feel he ought to be able to cope with her occasional involvement with crimes considering she is often consulted by the police. It seems to me he wants her to be a smaller, less skilled person than she is and I don’t like that very much. On the other hand, in the third book, I like her brother a lot. As far as I’m concerned, that’s a much more interesting relationship.

3) I feel I should mention that these are not cozy mysteries. Despite what I just said about Derrick, the romantic elements are minimal, the crimes can be more awful than one expects in a cozy – thankfully these are not shown explicitly – and also various scenes are much more tense and suspenseful than I’d expect in a cozy. The extended cave scene in the second book is really something. You wouldn’t want to start reading that part and then quit in the middle, let me tell you. It reminded me very much of the bit in the Touchstone trilogy where Cassandra is lost in that underwater cavern system. Terrifying.

4) The writing is basically okay. It’s straightforward and doesn’t call attention to itself. These are mysteries my mother would like because they’re well-enough written and because there’s no crude language and no explicit casual sex – she avoids a lot of modern mysteries because of those elements. Also, I don’t think the writing comes across as too textbook-y, even when something technical is being explained. However, I am going to add that the writing isn’t totally flawless either.

First, Conner often uses the ordinary past tense when the past perfect would be better. This has seemed to get increasingly common for decades in non-literary writing, but even though it isn’t rare, it’s grating. Second, Conner sometimes says “may” when she means “might.” That’s not unusual either, but I wish she wouldn’t. If she doesn’t reliably hear the difference by ear, her copy editor ought to correct that mistake and she ought to let those corrections stand. Third, the dialogue is often good, sometimes clever, and almost always serviceable, but it’s not unusual for Conner characters to speak without contractions when their dialogue would sound more natural with contractions. Unlike, say, Grayson Lanning, none of them have a formal enough manner to suggest they ought to speak that way.

All these issues are pretty minor and in fact my mother didn’t notice any of them even though frank errors leap out at her as though outlined in neon. If style isn’t super-important to you, then if these mysteries sound like the kind of thing you’d enjoy, you should certainly try them. If you’re a writer or aspiring writer, though, you might want to contrast the use of past tense here with the flawless use of past and past perfect in, say, Virginia Lanier’s bloodhound mysteries, Barbara Hambly’s Benjamin January mysteries, Rex Stout’s Nero Wolfe mysteries, or any mysteries that are on the more literary side, such as Louise Penny’s Inspector Gamache series.

Overall, the fact that I’m zipping through this series in doublequick time ought to suggest, correctly, that the stylistic flaws aren’t bothering me very much. If you try these, I hope you enjoy them as much as I am.