So, not a huge amount of time to read over the first part of this Christmas break, what with one thing and another, but I have read a couple of highly disparate books so far that I enjoyed quite a bit.

The first was a Regency romance by Cecelia Grant. You may recall that I read A Christmas Gone Perfectly Wrong a little while ago because I like Christmas-themed stories at this season. It didn’t blow me away, but I liked it. At the end, it had a teaser chapter for another book in the series, A Lady Awakened. This is the sort of title that does absolutely nothing for me, so if the teaser chapter hadn’t been there, I would probably never have glanced at the story. So good thing that chapter was offered, because this wound up being one of my favorite romances ever. 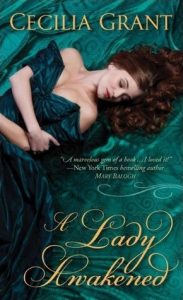 The recently widowed Martha Russell, nee Blackshear, is the most responsible, least seducable lady who has ever starred in a Regency romance. Nor is she seduced. She definitely does not swoon over the male lead, Theo Mirkwood, when she first sees him. Nor when she sees him a second time, or a third. Martha has a pressing need to become pregnant, as it happens:

Women could only bear what came. But a chance had come. A chance had come and looked her in the eye that very morning. . . . She could wait for Providence to come to these women’s aid, or she could make use of what Providence had already put in her path.

If Martha is pregnant, she will remain mistress of Seton Park, well-placed to see to the welfare of the estate and everyone who lives in the area. Also, all the women among the staff and tenants will remain safe from her late husband’s brother, a sexual predator. So, as I say, she has a pressing need to become pregnant. Mr. Mirkwood is conveniently placed to make that happen. As you can see, this is not a very romantic romance – not on Martha’s side, not for a good long time.

Theo Mirkwood is not the least bit like his name. He’s a dissolute young man, sent to the country by his father because he keeps getting into trouble in London. He’s warm and affectionate by nature, extroverted, good-hearted, and also quite ready to rise to meet someone’s higher expectations, if only higher expectations are offered. He naturally takes Martha’s unseducability as a challenge. It only gradually dawns on him that she might after all be seduced, by a man who is thoughtful, kind, responsible, and effective in taking action on behalf of others.

A Lady Awakened is a unusual romance in how long it remains swoon-free. The eventual romance is satisfying partly because of the long lead-up; the final resolution isn’t one that Martha or anyone else expected and could only have arisen from the synthesis of her strengths with Theo’s. I really enjoyed it.

I do have one quibble, which is the use of the word “lady” to describe all women in the story, including tenants and servants and so on. This seems ahistorical? But I’m no expert on the Regency era or surrounding periods. Maybe the term had that meaning at the time? Weigh in if you happen to know whether that’s the case.

Okay, the second book I finished recently was Deacon Locke Went to Prom by Brian Katcher. It’s a contemporary YA, as you might gather from the title. Katcher came up with a delightful premise: big, good-looking, shy, socially awkward Deacon is unable to bring himself to ask a girl to the senior prom, so after he finds out that way back his grandmother missed her own prom, he asks her. 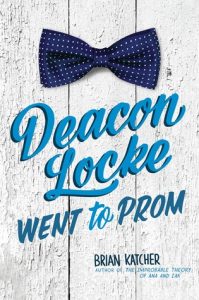 Everything else in the story radiates out from this one idea. When Jean (the grandmother) insists on dancing lessons, Deacon meets and instantly develops an intense crush on the young dance instructor. After the prom, which is a huge social success for him, he becomes a minor celebrity on social media – everyone thinks it is Just So Charming that he invited his grandmother to the prom because she missed her own. It doesn’t hurt that Jean is a youngish grandmother, socially poised and attractive.

The social media phenomenon snowballs, the relationship with the dance instructor, Soraya, gets complicated, Deacon begins to move out of his shell, and then Jean shows signs of developing early-onset Alzheimer’s or possibly dementia, and from there things become a good deal more complicated all around. I will add that it turns out Jean deals with this in the best possible way, though poor Deacon has a really tough time with it.

As always, Katcher’s secondary characters are very well drawn. Jean is particularly wonderful character, but even very minor characters, such as Soraya’s dad, are perfectly sketched in the few lines they are given. The way the social media celebrity phenomenon plays out is certainly believable, as is Deacon’s ambivalent response to it.

I’d have liked to actually see the Celebrity Dance Off competition rather than have its outcome reserved for the epilogue, but I can see what Katcher did it his way – including that as part of the real story would have inevitably added a lot of length to a novel that was probably getting long enough, and it was never central anyway. Fundamentally this is a story about Deacon and Jean; everything else is secondary. I really appreciated this focus on the relationship between people of different generations, as well as Katcher’s nuanced treatment of the mental decline Jean suffers. The ending is believable, mostly satisfying, and as happy as possible without throwing in a magic cure for Jean. I don’t think it’s my favorite of Katcher’s books, but I’d definitely recommend it if you enjoy contemporary YA.