So, I happened across a post at the NYT about the New Seven Wonders of the World.

Hold onto that idea for just a moment.

To review, as you may know, the Seven Wonders of the Ancient World were:

1. The Great Pyramid at Giza, Egypt, which I’m sure we can all visualize but keep in mind that originally they were covered with white limestone. That must have been just incredible to see.

2. The Hanging Gardens of Babylon, which were a seventy-five-foot-tall terraced garden.

3. The Statue of Zeus at Olympia, Greece, a forty-foot-tall statue depicting Zeus seated on his throne, with robes of gold.

4. The Temple of Artemis at Ephesus, which was 425 feet high, 225 feet wide, supported by one hundred twenty-seven 60 foot columns, and inspired awe in everyone who visited it.

5. The Mausoleum at Halicarnassus, which was 135 feet tall and ornately decorated with fine sculpture.

6. The Colossus of Rhodes, which was a statue of the god Helios that stood over 110 feet high, overlooking the harbor of Rhodes.

7. The Lighthouse at Alexandria, Egypt, which stood close to 440 feet high and was the third tallest human-made structure in the world; its light (a mirror which reflected the sun’s rays by day and a fire by night) could be seen as far as 35 miles out to sea.

I got all those details from the linked site, btw, it’s not like I knew offhand how tall the Temple of Artemis was.

Of course most of these ancient wonders were eventually destroyed, often by earthquakes but sometimes by deliberate vandalism.

So now, after that review, what about these “New Seven Wonders”?

1. The Great Wall of China.

4. The Colosseum in Italy

5. The statue of Christ the Redeemer in Brazil, which stands 125 feet tall and stands atop a 2000 foot hill.

…Okay, as far as I’m concerned, SOMETHING needs to go off the NYT’s modern list to make room for the Great Pyramid of Giza, which even without its limestone facing definitely belongs on any list of Seven Wonders. I guess room should be made by removing Chichén Itzá, because does one really need two super-impressive pyramids on a single list?

But I would be willing to replace the statue of Christ the Redeemer instead, because a 125-foot statue constructed with reasonably modern techniques and materials does not seem as impressive to me as Chichén Itzá.

Also, there are way bigger statues in the world. This list presents the seven largest statues in the world. As far as I’m concerned, the Laykyun Setkyar in Myanmar are big, but a touch gaudy. That might be an effect of the light or something, but I much prefer the Spring Temple Buddha, which is waaaay impressive.

Also, the list ought to include Mount Rushmore. If that’s not in the top seven, make a top ten list instead.

Click through if you like and pick the ONE statue that should be on a list of Seven Wonder of the World. The Spring Temple Buddha is the biggest, but is it the one you would pick?

The picture on that list of the Guan Yin statue is not great — here is a better picture of that one: 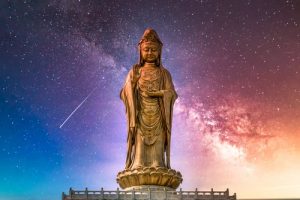