Thank you all for writing and posting reviews for Winter of Ice and Iron if you’ve already done so.

Or for telling me privately that Winter is one of your favorites or that you think it’s the best thing I’ve had published. Seriously, thank you for letting me know. This means a lot to me.

I get a good deal more enthusiastic about working on current projects when I see that my most recent title is enjoying a positive reception from readers, especially those of you I know personally.

While a handful of reviews make it clear that Winter isn’t for everyone … too bad, but not surprising … I’m happy to see so many positive reviews going up around the internet. Not to dwell on ratings, but do you know, Winter is the first of my books to pop up above 4 stars on Goodreads? You’d think The Floating Islands would have, or at least I would have thought so, but no.

Winter’s rating won’t have settled down yet of course. It doesn’t have many ratings yet — feel free to help out with that on either Goodreads or Amazon or both if you haven’t already — but I am guessing Winter will settle down pretty close to four, hopefully above. This is definitely a nice Christmas bonus. 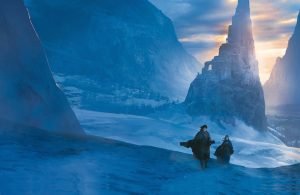 Here are some lines I am particularly likely to quote in the future:

[A] lush and deliciously imaginative world …. The story is tense throughout, with attention focused on its characters and the implications of its worldbuilding. Kehera’s resolute devotion to fighting against the odds even as the world shifts and realigns around her carries through to the cosmically satisfying ultimate battle.

The impressive worldbuilding never gets in the way of the narrative, which remains focused on the characters first — particularly on Kehera, whose steadfast commitment to her mission in the face of incredible odds will keep you rooting for her to the climactic ending. Consider this one proof a satisfying epic fantasy doesn’t have to mean an epic, multi-volume page count.

Rachel Neumeier’s Winter of Ice and Iron (Saga) walks familiar fantasy territory but marks new ground with her emotionally complex characters. … Kehera’s bond with her brother and her newfound companions is deeply felt. Neumeier doesn’t rely on heaving bosoms or overwrought confidences to convey the way people care for and love one another.

There’s very little I can say that can even do any sort of justice to the wonderfully intricate story, the characters that get under your skin, and the intrigue seeping through the pages. … The prose is atmospheric and you can almost feel the chill, the ominous tones, and the tension. … This is a dizzying book of magnitude, politics, love, and family. The plot is astounding because of its depth, details, and surprises. … You need to take your time with this, to become immersed in this slow burning fantasy that will reward you if you devote your time to it.

In this dark fantasy, the fate of four kingdoms is at risk when war threatens the already-uneasy peace between them. Kehara Raehema, princess of the most vulnerable of the Four Kingdoms, embarks on a mission to buy some time. Meanwhile Innisth Eanete, Wolf Duke of Pohorir, whose father is perhaps the leading driving force towards war, wishes to unite the people in peace despite his father’s plans. Kehera and Innisth soon find themselves drawn together as unintentional allies and the only path towards peace might just be joining forces against a greater evil emanating from spirits inhabit the earth itself.

Winters in Rachel Neumeier’s Winter of Ice and Iron can get pretty rough. As snow and ice blanket the Four Kingdoms, the obsidian winds rip down from the mountains, the night lasts for days and massive winter dragons terrorize commoners and nobles alike. Fortunately for us, the characters that Neumeier weaves into her tale of ambition, duty and family are more than ready to face it all. … [B]oth Kehera and Innisth hold ties to Immanent Powers, one of Winter of Ice and Iron’s most inventive elements. These magical, non-sentient elementals naturally form over generations, drawing power from the earth, the creatures and the people that inhabit their realm. Neumeier confidently employs these Powers, lending an ethereal and whirling grace to every appearance they make in the narrative. They are both the paint used to color this world and a reflection of the people that wield them.

And Kehera and Innisth are just as enthralling. The two ricochet off one another, giving each a sense of purpose and forward motion. Even with other memorable characters throughout, Kehera and Innisth command the reader’s attention from the moment they meet. … Winter of Ice and Iron is dark and unflinching, but also surefooted and heartfelt. From their first meeting through the gripping final sequence, real emotion and real history drive Kehera and Innisth’s ever-evolving relationship.

Neumeier’s book is a new classic of fantasy and deserves every award! The story is new and enthralling! The characters are excellent, fully designed motivations and fascinating. In all, this book is one of the best in the fantasy field! Fans of George RRMartin, Lois Bujold, Glen Cook and other masters of fantasy would be well advised to read this and be carried away by it!