Here’s a neat post from Book Riot: THE GOLD-BUG: THE MOST MYSTERIOUS EDGAR ALLAN POE STORY YOU’VE NEVER HEARD OF

… which I’m pretty sure I have read, but maybe not, because this sounds both cool and unfamiliar:

The Gold-Bug was the first work of fiction to incorporate cryptography into the plot. In fact, the very word cryptograph was invented by Poe and used for the first time in this story.

Before Poe, cryptography was a complete mystery to most people. Simple substitution ciphers like the one in The Gold-Bug were considered unbreakable unless you possessed the key to decode them. But Poe’s knowledge of language and obsession with logic, or “ratiocination,” made him realize that any code could be broken. And he showed people exactly how to do it.

Well, any simple substitution code, I guess. Obviously not any code ever. But this is so interesting. It actually reminds me of Gregor Mendel — because of course Mendel’s knowledge of math and obsession with counting is what led to his breakthrough understanding of genetic “factors” and particulate inheritance.

Realizing the public’s fascination with code breaking, Poe decided to write a story specifically for his cipher-fanatic audience. Throw in buried treasure, an exotic “very singular” island, mystery, madness, and—a must in any good treasure hunting tale—the spectre of death, and you have an intense tale of adventure that captured people’s imagination and made Poe a household name.

Very cool stuff. The code-within-a-code suggestion for the weird fake dialect used for Jupiter in the story is also interesting. I wonder if that could be true?

Anyway, let me leave you with a real gold bug: 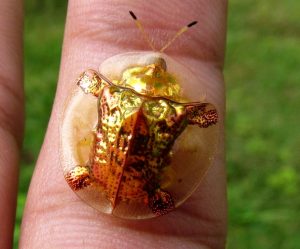