I surprised myself by choosing this one to read in the hotel during those long convention mornings when all normal people are still asleep. It was a good choice! Station Eleven turned out to be a really compelling story, so those mornings whooshed by. 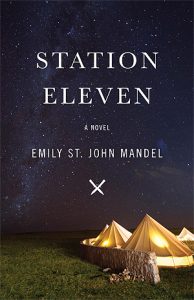 Here is part of the description of this book from Goodreads:

One snowy night a famous Hollywood actor slumps over and dies onstage during a production of King Lear. Hours later, the world as we know it begins to dissolve. Moving back and forth in time — from the actor’s early days as a film star to fifteen years in the future, when a theater troupe known as the Traveling Symphony roams the wasteland of what remains — this suspenseful, elegiac, spellbinding novel charts the strange twists of fate that connect five people: the actor, the man who tried to save him, the actor’s first wife, his oldest friend, and a young actress with the Traveling Symphony, caught in the crosshairs of a dangerous self-proclaimed prophet.

Why I tried the book anyway: Rave reviews from every direction, including from people whose taste I trust.

What I found: The Prophet exists, but his role in the book is surprisingly minor and his religious cult is neither large nor influential nor actually very important. Except on a small scale; if the Prophet’s goons kill you, you’re dead, and it’s probably not much comfort that his overall effect on the world looks like it’s going to be completely insignificant and ephemeral. Nevertheless, insignificant and ephemeral is just what his cult looks like. I expect twenty years further on from the ending of this novel, the Prophet will be remembered as just one more crazy cult leader, one of a zillion and a half minor lunatics who made random trouble here and there before someone dealt with him.

This was quite a relief.

What else I found: Station Eleven is a story drawn in beautiful circles – circles of time woven through with viewpoints that merge and separate and merge again. It’s literary but compelling, with plenty of sympathetic characters and a fundamentally hopeful ending.

A lot of the narrative takes place before the fall of civilization, even more of the narrative takes place twenty years later, and honestly very little during the fall itself. In that sense this is a thoroughly unusual post-apocalyptic novel. Those are nearly all adventure novels set during and immediately after catastrophe, whereas this story shows almost nothing of that. Here’s what it does show:

As indicated by the description, Arthur is a famous actor whom we glimpse, briefly, in his role as King Lear. He dies of a heart attack in the first moments of the book, just before the Georgia flu destroys civilization. But because the narrative swings backward and forward in time, his death does not preclude him from being an important viewpoint character. Now, imo, Arthur is not very likable; in fact he is certainly the least likable viewpoint character; but he is interesting and not actually unpleasant to spend time with. He’s the main viewpoint we have for the part of the story that takes part in the past, before the end of the world.

Kirsten, a child actor we meet in the first scenes and then later a member of the Traveling Symphony, is much more likable, even more important, and our main viewpoint for the part of the story that takes place twenty years after the end of the world.

Jeevan, who used to be an entertainment journalist and then began a career shift to be a paramedic, is also present in the initial scene. He helps link the past to the future. He is likable, once he quits being a journalist, and his viewpoint offers the reader a relatively small glimpse of the actual flu and the period of the fall. Clark, who eventually becomes curator of the Museum of Civilization, gives us another viewpoint of that time and also offers the reader a glimpse of the connection between Arthur and the Prophet. Miranda, Arthur’s first wife, was the artist who drew the graphic novel Station Eleven, which spins another thread among important characters and between the past and present narratives.

The viewpoints of these five characters create the braided narrative from which the story is woven. It’s a story that is complicated and multilayered but nevertheless easy to follow; it’s beautifully written and compelling from beginning to end; and I suspect it’s the kind of novel that will reward a second and third reading. Anybody who doesn’t much care for the disaster and competence porn of your more typical post-apocalyptic adventure story may well love this slower-paced more internal novel with its narratives that spiral around one another and circle through time. I enjoy the former, but I loved this one too.

I see that Emily St John Mandel has also written three other books: Last Night in Montreal, The Singer’s Gun, and the Lola Quartet. I don’t know that any of those sound exactly like my cup of tea; they all seem to be straight up literary novels; but I don’t know. After Station Eleven, maybe I’m willing to give one of them a try.