Okay, I actually did take notes from some of the panels at World Fantasy so I could write posts about them. Then I lost the notes. So…yeah. No posts about panels I attended, I guess. Perhaps shortly a post about the one panel I was on as a panelist.

The theme for World Fantasy this year was Alternate History / Secret History / Forgotten History and so there were a good many panels about related topics. From time to time a panel seemed to let those terms elide, so that elements of forgotten history — real world things people tend to forget about, such as the contributions of women to literature — would get confused with elements of secret history — fictional explanations for visible historical events, such as Hitler’s secret attempt to create a zombie army or whatever. This is regrettable, as it’s better to stick more or less to the official topic of the panel, since that is the panel people came to see.

Still, it’s a great theme, regardless of such details. So much one can do with all of those types of real and non-real history. Alan Smale was there, but I didn’t happen to go to any panel he was on — too bad, as I love what he’s done with his alternate history in his Clash of Eagles trilogy.

Favorite Alternate History: At the moment at least, my pick is indeed Smale’s trilogy.

Favorite Secret History: I must admit, I am pretty fond of the secret history embedded in the Black Dog world.

Favorite Forgotten History: I am having fun dipping into the Rejected Princesses site, though I have to say, the name seems less than great to me. I would prefer Forgotten to Rejected, since really that is what the site emphasizes. Also, some word other than Princesses, since almost none of the women in question is actually a princess.

Still a great site, though.

Okay, I will add: the Riverwalk in San Antonio is just beautiful. I loved walking along the river after breakfast every morning. Here’s a picture of a tiny amphitheater on the Riverwalk. 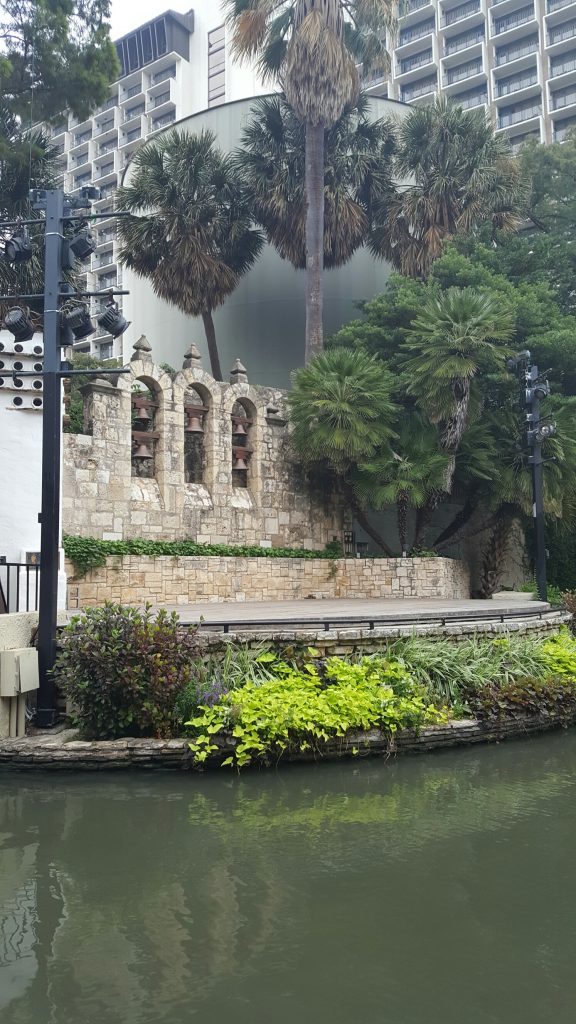 Tiers of grass-covered stone seating occupied space on the other side of the river, for the audience. I would love to watch some performance there sometime. A Midsummer Night’s Dream, for example. That would be a perfect performance for that setting.

Also, lots of great Tex-Mex restaurants. Acenar was very good. So was Iron Cactus. You must order guacamole if you visit either place. They make it right there at the table; it’s great. If I lived in that area, I would so have avocado trees in my backyard.

It was great hanging out with people I know, including Sharon Shinn, and great being able to do that at excellent restaurants. Plus I had a good conversation with my agent and think (hope) I have a better idea of which projects might be best to work on over Christmas Break. Which is coming up, after all, so that’s something to think about at this point.

Okay, what else? … All right, you know the bag of free books you get at WFC? Here are the ones I mailed to myself at the end of the convention: 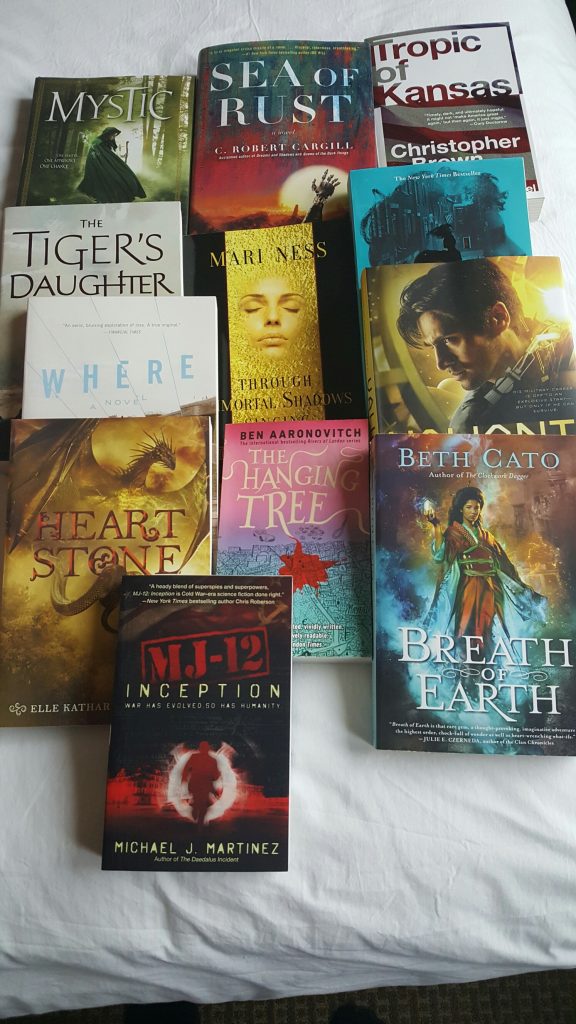 That one by Mari Ness is poetry. I love her posts at tor.com, so it caught my eye. Heartstone — I was quite pleased to pick that one up, because the sample from Amazon is dreadful. You get hardly any text; it’s all preliminary material. Lots of the others look intriguing. I bet it takes a while — years — for me to read them all, though.

Also, this pendant, which was far from free but which I like a lot: 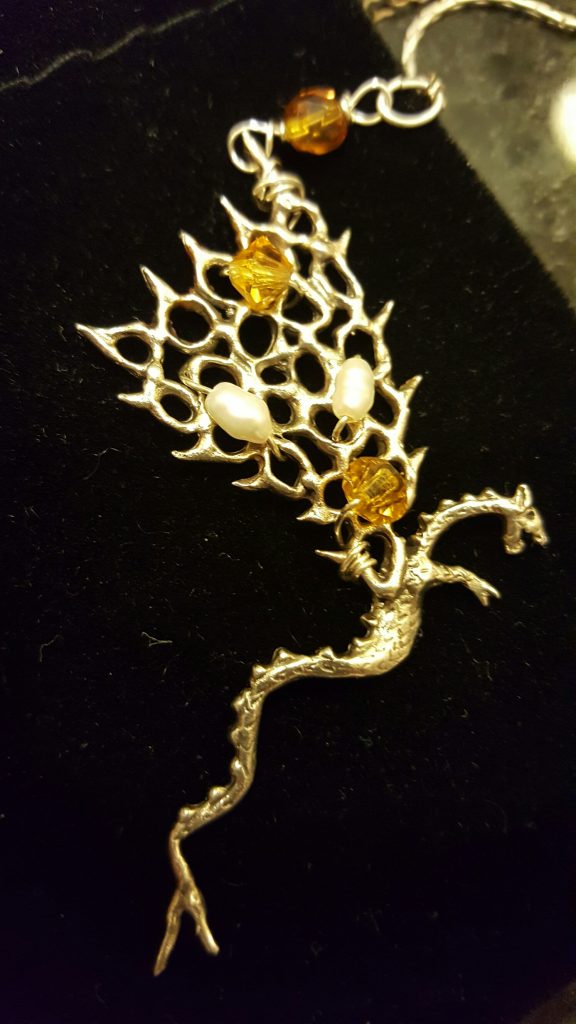 Nice, eh? I am wearing it now with a black turtleneck.

I will be on four panels, moderating two —

Friday at 5:00 PM — Young Adult SFF — Why are so many of today’s popular stories and movies centered around teens and tweens?

Saturday at 10:00 AM — Overlooked Writers — Even with Google, you may not have heard of these writers or books.

Saturday at 2:00 PM — Dystopian Childhood — When did dystopia invade children’s literature and why is it so popular?

Saturday at 10:00 PM — Sex Sells — Do you really have to put sex into everything to make it sell?

Nice variety of panels; I’m moderating the last two so I better come up with questions about those topics. I’ve already started generating questions, of course. You should feel free to chime in:

What is one reason so many of today’s movies aimed at teens and tweens? — I have a reason in mind that does not flatter Hollywood.

What is one book / author you would like to add to the “most overlooked” list? — I definitely have several in mind.

What is one reason dystopia so popular with younger readers? — I suspect *one* reason is that various books are being called dystopia when they really aren’t.

13 thoughts on “Back from WFC, now comes WindyCon”