Happy Halloween! I’m seeing some great costumes on facebook, but I must admit, all I do is wear an orange t-shirt that says I Don’t Do Costumes. I don’t dress up the dogs either. Or even buy a pumpkin to carve. Out where I live, no trick-or-treaters will come by, and since I don’t have kids myself, I just don’t bother. I hope those of you who DO have kids are enjoying the holiday and doing stuff for it!

As a nod toward Halloween, I will post this one picture I just saw on Facebook. My cousin Janet posted it — it’s her bus driver, who I’m sure would be pleased to have this costume as widely admired as possible: 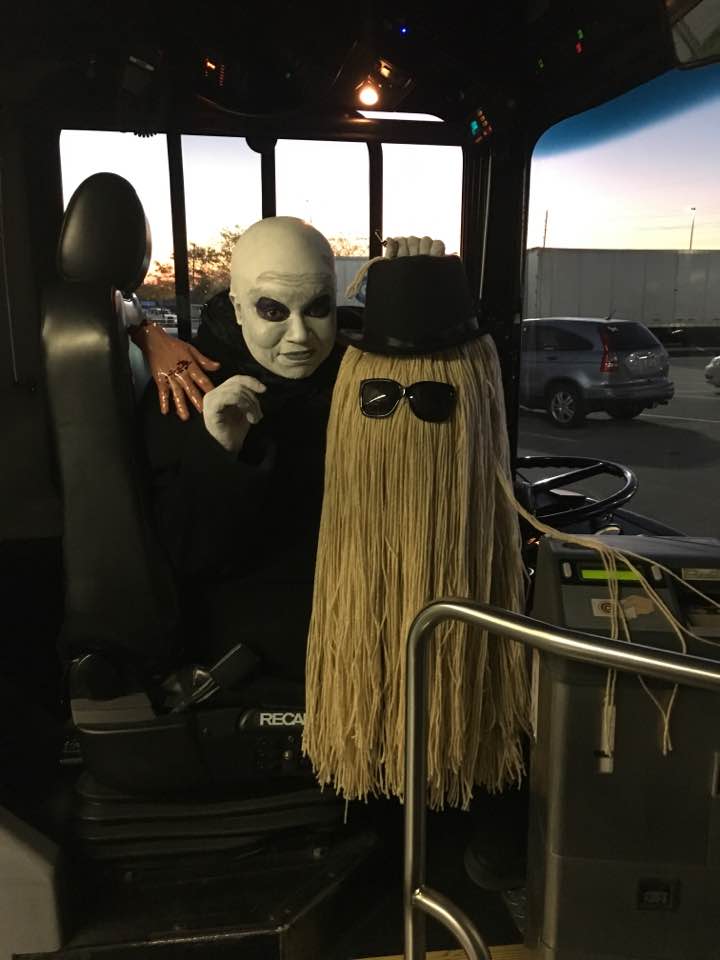 Pretty amazing, eh? If I went to this much trouble, I’d also do the masquerade at whatever conventions were near Halloween, cause this is too cool not to show off as many times as possible.

Here is something peculiar and potentially spooky:

How Far Away Are Active Invisibility Cloaks?

According to University of Texas researcher Andrea Alù, a battery-powered (or active) cloak composed of metamaterials might prevent a broadband radio signal from scattering off a target, an important step towards making objects undetectable to the human eye.

Metamaterials are man-made materials that can manipulate the electromagnetic spectrum in weird ways. The science of building them and tapping their emergent properties is still in its infancy. Alù and his team, for example, are working only with nonvisible wavelengths. But even at this early stage, metamaterials lend themselves to interesting military applications, such as better anti-radar stealth and antennas that don’t interfere with each other.

“Our group was the first to theoretically show that metamaterials could provide a realistic route towards invisibility and cloaking,” he says. “We are now working to experimentally prove broadband cloaks”—those with coverage for a wide spread of frequencies—”for radio waves and cloaked antennas. These possibilities are in reach within the coming months.”

Not necessarily the technological achievement I most want to see in actual production! But certainly interesting, and very science fiction-y.