The puppies are three weeks old! They now stay awake for about a minute after nursing, but then they collapse again. They are up, but very wobbly. It’s quite typical for a puppy to growl, wobble, attempt a pounce, fall over on top of a littermate, give up the whole idea, and go to sleep.

Their lives will be completely ruled by eating and sleeping for another week or so. Here is Puppy Girl 2, just a second before she fell asleep on her mother, thus offering this adorable shot: 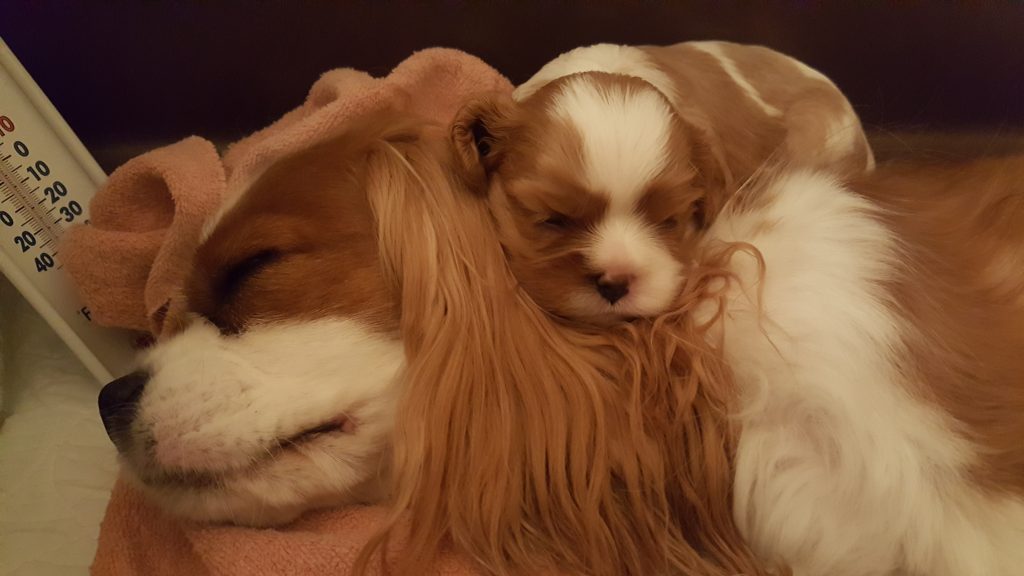 The other three are down by Honey’s tummy, asleep in a row like little piglets.

Both girls are now sampling real food. Those hippo boys have really been too much competition all along, so I have been supplementing by tube feeding formula almost every day. I’ve been feeding the girls about 8 percent to nearly 20 percent of their calories, depending on how much they seemed to be gaining on their own.

Well, by three weeks, tube feeding is a real nuisance. The puppies are aware of what you’re doing and they aren’t too keen on it as a rule, though a puppy reared completely by tube can have a much more positive feeling about the procedure — that would be puppies with cleft palates or some other issue that completely prevents nursing. But for my girls, it was getting to be a disagreeable experience for us all. So the day they turned three weeks (Wednesday), I suggested they try soaked kibble dowsed in formula. They were very enthusiastic and extremely messy!

By now any girl that hasn’t gained enough in the past eight to twelve hours is noticeably more eager to eat real food. That was Girl 2 last night and Girl 1 this morning. If they’ve been gaining on their own, they are equally noticeably not interested. I offer food only after they nurse so they will encourage Honey’s milk production to keep up with their needs.

I haven’t even suggested food to the boys yet. Those little hippos will almost certainly be unimpressed by the idea for at least another week.

Some books recommend weaning at five weeks. I think that’s ridiculous. Why add unnecessary stress for either the puppies or the mother? I let the mother wean them on her own schedule. Honey isn’t nearly as tolerant as some mothers, but even so, the puppies will be nursing at least a little for at least six or seven weeks.

The important thing is that by the time I fly to San Antonio for World Fantasy, those little girls will definitely be independent of the tube. Whew! I had some people in mind I could ask to help my mother if tube feeding was still necessary, but as it is, I am certain that won’t be necessary, barring some kind of weird setback.